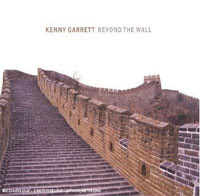 KENNY GARRETT
Beyond The Wall
Nonesuch

It's rare to hear an album that causes you to reassess an artist's entire prior career. But based on this brilliant new release, alto saxophonist Kenny Garrett has hidden depths that must now be teased out of earlier discs like Songbook and Triology - which until now had seemed like glib technical exercises.

Beyond The Wall features the rhythm section of pianist Mulgrew Miller, bassist Robert Hurst, and drummer Brian Blade, and two very special guests: tenor saxophonist Pharoah Sanders and vibraphonist Bobby Hutcherson. These two are a direct link back to the first wave of free and avant-garde jazz in the early to mid-1960s, and they inspire their younger compatriots. The album opener, "Calling," is a modal piece based around Eastern-influenced melodic lines, exactly the kind of thing that inspired both Coltrane and Sanders to florid heights 40 years ago. Garrett has never sounded better than he does here, duetting with the older man as the rhythm section surges beneath them. It's not a screamfest - it's beautiful, spiritual music, the kind of thing jazz used to aim for all the time but rarely does anymore, except on indie releases that sell 1,000 copies to the same 1,000 people every time.

The rest of the album ranges from Latinate vamps like "Qing Wen" to gorgeous ballads ("Tsunami Song," "May Peace Be Upon Them"). The nearly 12-minute "Now" is the track that comes closest to matching the awesome beauty of "Calling," with both Sanders and Hutcherson soloing wildly as the rest of the group does its best to deserve such stellar company. Occasional and somewhat cheesy vocals can't diminish the impact of all these musicians working at the top of their abilities. This is a shockingly powerful album. Who knew Garrett had it in him?
Posted by Phil Freeman at 8:14 AM