The following was posted on the Southern Lord forums last week regarding the long-awaited 2CD Burning Witch reissue, Crippled Lucifer (a copy of which is sitting on my desk as I type this):

all Burning Witch -CL re-issue cds have been recalled for re-packaging. We're hoping to get them back out in Jan.
any cds that are available are defective and should have been recalled by the distributors,/or sent back by the stores.

Well, the copy I imported into my iPod plays just fine, so I'm guessing the defect must be that the goddamn booklet is too thick to fit into a standard jewel case. Gotta have room for all those bleached-out photos, reproduction lyric sheets, weird diagrams, etc., etc. Here's a tip, guys: I don't care what Decibel and Arthur and the New York Times tell you: you're not makers of objets d'art, you're a goddamn metal label. Get the aesthetic wankery under control, huh?
Posted by Phil Freeman at 1:42 PM No comments:

ONE PHIL TO ANOTHER

I haven't posted anything in a while, because I'm in a floundering, befogged state of mind where I don't really have much to say about anything at all. So go read this instead. I am truly proud to know Phil Nugent; he's one of the best writers around. Go. Read. I'll be back around sometime soon, but there's no guarantee I'll have anything half this thought-provoking to offer.
Posted by Phil Freeman at 9:50 AM No comments:

SOMETIMES MY JOB IS KINDA COOL 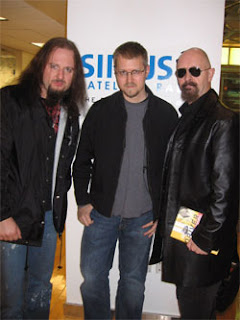 Posted by Phil Freeman at 1:48 PM No comments: 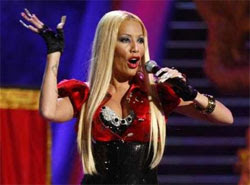 Watching last night's Latin Grammys was an occasionally painful, occasionally baffling, frequently choke-on-your-food hilarious experience. I don't really work for Global Rhythm anymore, so I'm not obligated to pay attention, but I checked it out in hopes that at least a few of the performances would be, if not mind-roastingly awesome, at least cooler than those on the MTV Video Music Awards or Wednesday night's CMA Awards. And there were some good ones, along with some not-so-good ones.

First of all, though, what the fuck? Is Juan Luis Guerra dying or something? I understand that merengue, for the most part, is vulgar, ass-shaking music made entirely out of Casio presets, but does that mean the Latin Grammys have to give six trophies to the Dominican Republic's answer to Rubén Blades, only more boring? I can't stand Juan Luis Guerra's voice, I hate his fucking hat, and his music makes all the blood spiral out of my brain. But there he was, all 7'6" of him, thanking Jesus and his wife six goddamn times last night. Bah.

Oh, well. At least he wasn't ripping off more deserving artists, the way Jesse & Joy did, taking Best New Artist over Miranda!, who totally should have won.

But enough about the awards. I don't actually remember who won most of them, except for Aterciopelados, whose matching tracksuits - were they supposed to be parking attendants, or something? - were at least momentarily amusing, even if they're still annoying hippies. I think the whole evening built up to Ivy Queen's performance.

A moment, though, to make fun of Daddy Yankee, and reggaeton in general. All the reggaetoneros (except for Calle 13, who looked like the art-student hipsters they are, right down to the use of native people as fashion accessories, and Wisin y Yandel, who looked okay, except for haircuts so short the hair looked airbrushed on their gleaming skulls) looked like they were at the prom, and acted the part too, throwing gang signs at the camera all the way down the pre-show red carpet. Daddy Yankee attempted to stand out by dressing like a 65-year-old Jewish man; his suit hung on him like he was planning to gain 50 pounds in the very near future, and had informed his tailor in advance, and he performed wearing a hat that looked like he'd dug it out of Walter Matthau's grave.

But anyway, back to Ivy Queen. I know I said awhile ago I wouldn't make fun of her for looking like someone wearing a horse's skull as a mask, and I won't. Last night, she looked like a drag version of Madonna's Japanese phase from a few years ago. She performed "Que Lloren" (and admittedly, her performance was tight and her voice very powerful - the woman does know how to command a track and an audience) in vaguely Chinese - like, if all you know about Chinese culture is Crouching Tiger and paper lanterns in the take-out place, this would make sense to you - garb and surrounded by muscle dudes in gold demon masks. But the best part was the big video screen behind her, which displayed footage of samurai and geishas. Chinese, Japanese...whatever, right? Considering most Latino performers shout out the name of their country almost as fast as they thank Jesus when winning a trophy, she sure was comfortable lumping all Asian cultures together. Stay classy, Ivy Queen.
Posted by Phil Freeman at 7:28 AM 1 comment:

Decapitated drummer Witold "Vitek" Kieltyka died in a Russian hospital from injuries sustained in a recent road collision. He was 23 years old.

According to the Polish Internet portal Onet.pl, Vitek underwent trepanation, a form of surgery in which a hole is drilled or scraped into the skull, and was due to be transported to a hospital in Krakow, Poland for further treatment. Covan's family released a statement Thursday, November 1 that the vocalist's condition had improved. At the time, he was still said to be at a hospital in Novozybkov, Russia, where he and Vitek were taken following the accident.

This really, really sucks. Decapitated are (were?) one of the best death metal bands in the world, to my ear, and Vitek's drumming was a huge part of that sound. His work on their most recent album, 2006's Organic Hallucinosis, was simply unreal - he shifted between blast beats, hardcore pounding and intricate rhythmic exercises better than almost anyone in the genre right now, really propelling the band forward. I can't recommend their studio work highly enough. Their debut, Winds Of Creation, was just reissued by Earache with a live DVD appended. It's not nearly as breathtaking as everything afterward - they were still in debt to older acts (the album included a cover of Slayer's "Mandatory Suicide") - but Vitek was only 15 when it was made, and his playing is already the equal of peers twice his age. I recommend starting with 2002's Nihility, though - it's one of the most unique statements in 21st Century death metal, from its eerily beautiful cover art to the throttled, almost industrial guitar tone. The riffs are intricate and brutal at once, frequently coming from unexpected directions to hook you right through the guts. 2004's The Negation - which includes another nod to forefathers, a cover of Deicide's "Lunatic Of God's Creation" - is even more compressed and assaultive. Indeed, Decapitated seemed to be finding ways to say as much as possible in the shortest amount of time with each album - Winds Of Creation was nearly 41 minutes long, but Nihility only hit the 35-minute mark, The Negation was just under 33, and Organic Hallucinosis barely over 32. Even so, they were getting heavier and heavier, and more and more progressive, in their knuckle-poppingly brutal fashion.

I saw Decapitated at BB King's in 2005; they were the band on the bill I was most excited to catch live. It was their first tour with Covan, who'd just replaced original vocalist Sauron. They weren't the most thrilling sight in the world, honestly (and the single-camera recording of the performance, offered as a bonus DVD with some editions of Organic Hallucinosis, did them no favors). A technical death metal song is about as easy to play as an Elliott Carter string quartet, so they were focused on their instruments to the exclusion of jumping around and making faces for the crowd's amusement. But seeing that music performed live was a kick in the ass all by itself, and they've toured the U.S. a few times since then. In fact, they were going to be one of the opening acts on the upcoming Amon Amarth tour, alongside Himsa and Sonic Syndicate. I'm still going to that show (NYC, 12/3) because I love Amon Amarth, but not having Decapitated on that bill, and knowing why they're not there, is gonna be kinda depressing.

Every member of Decapitated is an astonishing instrumentalist, so I'm halfway hoping they continue, but at the same time I really don't know where they're gonna find another drummer that's gonna take my breath away like Vitek did.
Posted by Phil Freeman at 8:05 AM No comments:
Newer Posts Older Posts Home
Subscribe to: Posts (Atom)