RETURN OF THE WIZARD

Electric Wizard are releasing a new album, Witchcult Today (doesn't that sound like a newspaper, like Women's Wear Daily for Satanists?), in November. I just got an advance from the publicist today.

I love Electric Wizard, but within the metal community my views are weird, even heretical. See, the Dopethrone album, which may have the greatest album cover in metal history 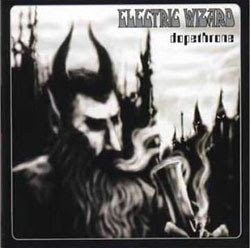 is musically kinda drab. It's big 'n' loud, but all the songs are the same - long, sludgy doom avalanches, with nothing to liven things up but the (very) occasional sampled bit of movie dialogue. Their second album - and Dopethrone's predecessor - Come My Fanatics... was much better. And in the early 2000s, the band underwent near-total upheaval. Guitarist/vocalist Jus Osborn is the only original member left at this point, and the group's gone from a power trio to a two-guitar quartet. Their 2004 album We Live (which may or may not even have had a U.S. release - the version I've got is on UK label Rise Above) was the debut for that version of the group, and I thought it was fucking great. Witchcult Today also features the two-guitar lineup, and it's fucking thunderous. Highly, highly recommended. Hope they tour the U.S. behind it.
Posted by Phil Freeman at 12:25 PM