In which I get all political 'n' stuff. (Not political like my genius friend Phil Nugent, but political by the standards of this here apathetic, head-up-own-ass blog.) 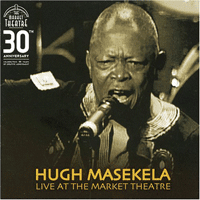 But this two-CD set demonstrates his skills as a horn player and showcases his skill at holding an audience in the palm of his hand. The band (saxophone, guitar, bass, keyboards, drums and percussion) glides effortlessly through long Afro-funk vamps, atop which Masekela lets loose long, rippling ribbons of notes or sings in a voice only slightly hoarsened by age.

Of course, politics are unavoidable. "We'd like to dedicate this song to people who lose their lives working in cheap labor," he says, introducing "Stimela." It's the beginning of a long monologue about the underside of the global economy, particularly the arduous and life-threatening existence suffered by gold and diamond miners in Africa. When the music gets going, though, it's so life-affirming that it almost balances out the despair Masekela is describing.

And just like it always does - whether in reggae, the blues, or Appalachian mountain music - that dichotomy between stark existence and transcendent music says something truly profound about the human spirit. This is a long release (two discs, one nudging the 80-minute mark and the other at 70), but few passages will inspire the feeling of "sitting through" anything. 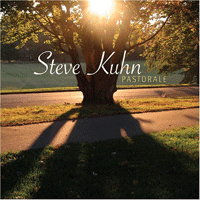 The piano trio disc is usually gentle, melodic, and unaccountably pleased with itself - despite, or perhaps because of, the inherent limitations of the form. That said, this CD, a Japanese release from 2002 just hitting U.S. shelves, is a very well recorded example of the form, with excellent, energetic performances by all involved. It's never smart to underestimate drummer Billy Drummond, of course, and Eddie Gomez is a powerhouse, albeit one with the distressing habit of singing along with his own bass solos. Kuhn (who composed two of the disc's nine tracks, the other seven being standards) refuses to be intimidated by his thunderous rhythm section, dispensing melody and acerbic lyricism by the fistful. 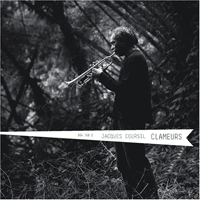 Jacques Coursil's Clameurs is a completely different animal. Coursil bounced around the late '60s free scene, playing with Sunny Murray and recording two albums of his own - Way Ahead and Black Suite - for the legendary BYG Actuel label. This is his comeback effort, and it's primarily a solo trumpet disc with surprisingly effective synthesized string parts. But the heart of it lies in the spoken texts (included as a PDF file on the CD) by poets Monchoachi and Edouard Glissant, political essayist Frantz Fanon, and pre-Islamic poet Antar. The liner notes say, "The slave's cry, the shout of the oppressed, strangles in his throat...the shout is a free man's privilege." Coursil intends this dignified, solemn music to provide a voice to the historically voiceless. In other words, his politics - and the way he uses his art to express them - haven't changed since the '60s, even if he's not the fire-breather he once was.
Posted by Phil Freeman at 7:22 AM