THE RAPTURE OF METAL 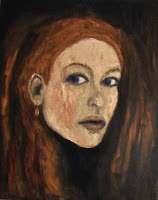 The vast majority of musicians have day jobs, but few are as open about that fact as Norwegian vocalist/composer Runhild Gammelsaeter. "It's never been a goal for me to sell many records, which is contrary to many bands," she says, "but that's because I have a job so I don't need to make money on this. I can afford to make the expensive choices of not performing and keeping a low profile."

Gammelsaeter has always been a somewhat mysterious figure within Metal's avant garde. As a teenager, studying in the US, she sang for Thorr's Hammer, a short-lived Doom quartet featuring future Sunn O))) members Greg Anderson and Stephen O'Malley; her ability to shift instantly from a clear, plainsong-like vocal style to guttural growling, when combined with her icy blonde beauty, made an immediate impression. But she vanished into the lab, getting her PhD in physiology from the University of Oslo. She didn't make music again until 2003, contributing vocals and abstract breathing sounds to Sunn O)))'s White 1. Then she disappeared again, re-emerging as half of Khlyst, alongside producer/multi-instrumentalist James Plotkin on the 2006 Hydra Head release, Chaos Is My Name (Khanate drummer Tim Wyskida performed with the pair live). And now she's making her debut as a solo artist with Amplicon, a limited edition release on Utech.

Label head Keith Utech had envisioned a series of eight releases, each with a cover painting by Stephen Kasner (whose paintings for Chaos Is My Name Gammelsaeter eventually purchased). "Because [Kasner]'s very interested in understanding the material, I sent him the lyrics and talked to him on the phone about the concepts, so the art he creates is always very special," she says. It was partly the opportunity to work with him for a second time, and partly the absolute freedom of the project, that convinced Gammelsaeter to make a solo album, despite early reservations. "A bigger label would want to be involved, where [Utech] just said, deliver a record by 1 May. Which was amazing. You don't get that kind of freedom."

Gammelsaeter clearly values the ability to come and go as she pleases, for professional and personal reasons alike. "When I did my PhD, I had a scholarship and I went to the States and worked in different labs, and I had some professors react very negatively to my association with Black Metal. So I started to discover that I needed to step carefully and be reflective about what I say and do and how I mix my things." At the same time, she says, "I've always liked underground scenes, cult-type music, and it's been somewhat purposeful for me to not make it so accessible, and not expose myself very much. Not really to be a mystery, but to make it so inaccessible so that you don't push it in anyone's faces. People have to discover it for themselves. And I'd rather have my four fans who really love what I do and who spent the time to discover it than to have 100 people who just think it's funny, who saw me live or read about it in the newspaper or something like that."

Amplicon is a record made for cult appreciation and mass apathy, if not revulsion. Its 11 tracks follow a sequence modelled on the cycle of life (titles include "Incubation," "Birth," "Coming To," "Love," "Senescence" and "Dying"), and the disc's title relates to Gammelsaeter's day job - an amplicon is a piece of DNA that has been synthesized using amplification/gene-duplication techniques. The music is pretty dependent on advanced technology, too. It's an intricate collage of cacophonous voices, acoustic and electric guitars, synthesized heartbeats, drones, organ and more. Gammelsaeter croons, mutters, howls and roars in English and Norwegian, sometimes singing what sounds like a murder ballad, other times ranting about genetics and physiology. It has antecedents in both Nico and Jarboe (particularly the latter's vocal shapeshifting and emotional rawness), but is ultimately a unique and personal document. It's an unsettling experience, not just because of the competing and overlapping voices, but the jarring transitions between acoustic and electronic, between silence and sudden bursts of sound - there's never a moment where expectations can be comfortably set. Gammelsaeter describes most Metal as "like Mozart, you know what's coming," but the music on Amplicon, while logical, is anything but predictable.

"I basically went home at night and got myself Logic and sat down and started working, and it ended up being a creative process where I got so pulled into it that I couldn't involve anyone else," she says. "I would sit down for an hour and do clean vocals and acoustic guitar, and then I would do some mixing sounds or effects or something like that. And I would clip it together, keeping the best of it, and I would end up putting on stuff like screaming or effects of different kinds. It just became like a patchwork of things, where you pick out your own favourites of the different elements that I thought the song should encompass and gluing it together in some way. And I liked the sharp breaks, that was very purposeful of me. I didn't want to make it gentle. I really liked the jumping effect of the switching from one thing to another.

"It's intimidating and it's frustrating, but afterwards, I told my friends, everyone should make a solo record," she continues. "It forces you to become very organised, this large project that you have to complete and make a totality out of all your own ideas. There are a lot of choices involved, choosing what you like of your own things and what you don't like, choices in how you're organising it, producing it, structuring it - it's kind of a huge thing. I did my PhD previously, and I thought of it sort of the same way. You start off with all these blank pages and different kinds of results, and you have to amass them into this complete thesis that you deliver in the end."
Posted by Phil Freeman at 7:14 AM