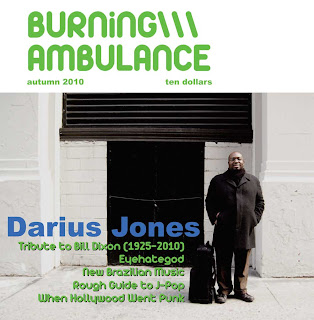 I haven't made a big deal about it here, other than posting a link in the right-hand column, but I'm the editor of an intermittent journal of the arts called Burning Ambulance. We call it a "quarterly," but the first one came out in late February and #2 is out, well, now.

The idea's a pretty simple one: I gather a bunch of smart, funny, talented writers and talk them into long-form pieces about subjects that interest them. I write one or two myself. That's it. No consideration for what "everyone" is talking about this month; no worries about timeliness; nothing but love.

This issue features a cover story, by me, on alto saxophonist Darius Jones; a profile of the New Orleans metal band Eyehategod by "Grim" Kim Kelly (plus a half dozen poems by their vocalist, Mike IX Williams); an exploration of the music of Cris Aflalo and Heloisa Fernandes, two neotraditionalist composer/performers from Brazil whose work is much more interesting than a lot of what comes out of that country these days; a fantastic essay on Hollywood's attempts to come to grips with (and exploit) punk rock in the late '70s and early '80s by Phil Nugent, whose blog should be a daily stop for you and everyone you know; a beginner's guide to J-pop; and a tribute to Bill Dixon by musicians who worked with him, including William Parker, Alan Silva, Barry Guy, Rob Mazurek, Warren Smith, Joe McPhee and others. You get all that for just $10 (plus shipping), or $5 if you want a digital download instead of a handsome, perfect-bound hard copy. Interested? Click here.
Posted by Phil Freeman at 6:03 AM
Labels: alan silva, barry guy, bill dixon, burning ambulance, darius jones, eyehategod, joe mcphee, kim kelly, phil nugent, rob mazurek, warren smith, william parker

thanks for putting that stuff together man. i've read the articles on darius jones and bill dixon so far, and they're great reads. you have no idea how much fun it is (well, you probably do) to read lengthy articles about those topics/musicians...
thumbs up, let's hope many more issues will follow!