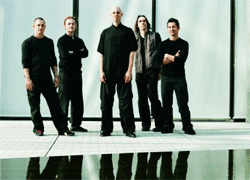 I've recently become intrigued by the music of Nik Bärtsch. (That's him in the middle.) A couple of writers I know have been yelling at me to pay attention to the guy for some time, but he only had one easily-available CD, Stoa (ECM, 2006). Well, one more writer just had Bärtsch's manager send me - in my capacity as Global Rhythm's managing editor - the guy's entire back catalog. That includes one solo CD, Hishiryo; two with the piano/bass clarinet/marimba/drums band Mobile, RGM and AER; and three by his currently best-known band, Ronin - Randori, Rea and Live, which I'm listening to as I type this.

In other folks' reviews, I've read comparisons to Philip Glass, James Brown and Steve Reich, and all of those apply. I'd also throw in early '70s Stevie Wonder - there's a lot of great electric piano sounds here. Ronin's music sounds like funk played by man-sized, infinitely patient spiders. It moves slowly, never working itself up into anything resembling ecstasy and never achieving release or catharsis. It seems like a loop, but there are tiny, incremental changes over the length of each piece (they're called moduls, and numbered - "Modul 11," "Modul 15," "Modul 8_9" - you get the idea) that do eventually build up into something quite impressive, but it's impressive as much for its restraint as for any affirmative musical gestures by the bandmembers. Bärtsch is the keyboardist, and he never attempts to dominate the ensemble; indeed, he barely seems to guide them. The drums tick along, the bandmembers lock in (must be that Swiss thing that keeps their timing so impeccable), and the band moves as one.

As with Reich, it's hard to imagine what the physical experience of playing this stuff must be like. It's probably like having an itch that an armed guard is preventing you from scratching. Similarly, I wonder what the effect on a live audience must be. Yeah, your leg is twitching to the beat, but not enough so's you want to get up and dance or anything - just enough that you gradually get twitchier and twitchier, driven close to madness by the metronomic and relentless buildup to...nothing, really. The band just stops at some point, after nine or twelve or fifteen minutes. Then they start again, playing a slightly different groove with the exact same Zen-like, loop-like, hypnotic qualities.

Yeah, I know, this doesn't read like an endorsement. But it is, I swear. You already missed his NYC debut - he brought Ronin to Joe's Pub on July 3 - but I'm pretty sure his back catalog just got U.S. distribution, so go check some of this stuff out. Your notion of what constitutes "funk" will be forever altered.

(N.B.: Everything I've said above applies exclusively to Ronin's music. The music Bärtsch makes with Mobile is much more jazz-inflected - the bass clarinet player takes what almost amount to solos - and the general vibe is much more ominous and creeping, reminding me of Goblin or some of the driftier, weirder passages on Bitches Brew. Equally highly recommended, but very different.)
Posted by Phil Freeman at 11:48 AM