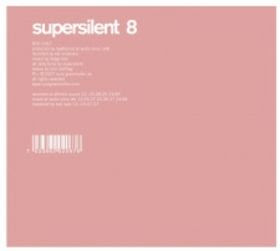 Norwegian improvising quartet Supersilent's debut - a three-CD set simply titled 1-3 - was also the first release on Rune Grammofon, way back in 1997. Ten years later, their eighth release, and their first studio album in five years - 7 was a live DVD - follows the ultra-minimal pattern of all its predecessors.

The band members' names don't appear on the cover, and the tracks are numbered ("8.1" through "8.8") rather than given titles. Still, there's no disguising these four musicians' sound. Trumpeter Arve Henriksen, guitarist Helge Sten, keyboardist Stale Storlokken, and drummer Jarl Vespestad, whether together or alone, sound like no one else making music today.

The album starts off in a very dark place indeed. "8.1" is a morass of rumbling and droning synths, a drumbeat like a whale's heart heard from inside its stomach, and guitar that skronks periodically in the corner like a sulky child. The total effect is somewhere between Tangerine Dream and Black Sabbath: ominous and fearsomely loud.

Much of the music comes from this creepy mindspace. "8.5" features distorted vocals and gentle, choir-of-haunted-angels synths hovering in the right speaker like something from a John Carpenter movie soundtrack. Given the general desolation and creepiness of the goings-on, it's no surprise that trumpeter Henriksen, the gentlest spirit, is largely absent. He first shows up toward the end of "8.5," blowing gentle, almost flute-like lines and shadowed by delicate synths. This is in large part a forbidding, cryptic album, occasionally almost metallic in its loudness but also disconcertingly beautiful.
Posted by Phil Freeman at 10:49 AM