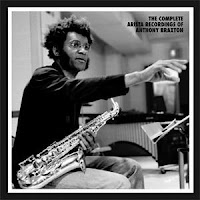 Saxophonist/composer Anthony Braxton's reputation as one of jazz's most intellectually rigorous avant-gardists was well established by 1974, but Arista signed him anyway. He recorded nine albums for the label; two more titles, licensed from the Freedom imprint at the time, are not included in this set. Almost all of this material has been out of print since debuting on vinyl three decades ago, and much of it's among his best work.

The music runs the gamut from solo saxophone excursions to small-group sessions (duo, trio, quartet) to a single epic composition performed by four 39-piece orchestras playing simultaneously(!). It's great to have this material back (with the possible exception of that orchestral piece and For Two Pianos, neither of which feature Braxton playing an instrument).

No potential listener should be warded off by Braxton's dry, academic image, or this box's price tag. Albums like New York, Fall 1974, and Five Pieces, 1975 are strikingly accessible. Any fan of Ornette Coleman's 1959-1960 recordings can hear the beauty in the musicians' four-way interaction. The live The Montreux/Berlin Concerts is suffused with a joyous vitality, belying Braxton's reputation as a chilly avant-gardist. The somewhat more forbidding material on Alto Saxophone Improvisations 1979 and For Trio offers a rarefied, ascetic type of beauty, but won't scare away fans of the Art Ensemble of Chicago (AEOC hornmen Roscoe Mitchell and Joseph Jarman turn up as guests on the latter album). This box isn't all the Braxton a serious jazz fan needs, but it's a tremendous collection.
Posted by Phil Freeman at 5:28 AM

I haven't had the pleasure to listen to this yet, but the general agreement is that this is a fantastic collection. There are some interesting Youtubes with interviews of Antony Braxton that are a joy to watch.

i had a couple of the arista records back in the day... i bought them as cut-outs in the early '80s... i tried to listen to them but they were way over my head... i ended up selling them amongst other things when i needed some cash...

lately i've been doing a jazz radio show at a college radio station with an awesome library and have re-visited braxton... and i dig him so much more now that i'm a fuckin' old dude...

i sure wish somebody would give me this box for x-mas...!