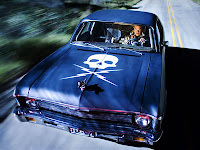 Currently watching Death Proof on one of the cable channels. I bow to no one in my admiration of Kurt Russell, but this movie is a piece. of. shit.

To clarify, it has some good stuff in it, but Quentin Tarantino should never be allowed to write dialogue. Ever. His jokes are lame, his popcult references are just as lame and twice as shoehorned-in, his taste in music is about 80 percent for shit (the only good song on the whole damn DP soundtrack is "It's So Easy," by Willy DeVille), and he has absolutely no ear for the rhythms of actual human speech. He should never be permitted to write dialogue. He should, at best, be allowed to direct action sequences, second-unit, for directors who have the ability to get convincing monologues and conversations and scenes with emotional resonance out of their actors.
Posted by Phil Freeman at 6:37 PM