Faith No More, Alice In Chains, Stone Temple Pilots, Soundgarden...What Year Is It? 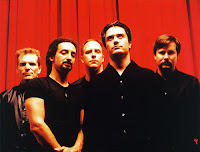 It's been assumed for some time that pop-cultural nostalgia runs on a 20-year clock. There was a tame 1950s revival in the '70s with Grease and Sha Na Na. Various appropriations of hippieism took over the '80s, even as original '60s bands stubbornly refused to go away. Grunge acts of the early '90s clearly drew inspiration from hard-rock acts of two decades prior, like the Stooges and Grand Funk Railroad. But after less than 15 years, a herd of '90s heavy-rock acts is already back, haunting festival stages and the few remaining record stores like unruly ghosts.

The grunge decade's parade of reunions, and fans' joyous responses, seems like an admission that as rock fans get older, staying hip gets harder, and looking backward becomes increasingly appealing. Generation X, like the boomers before it, is ready to snuggle up with old favorites.

Soundgarden's final studio album came out in 1996, but the band posted an enigmatic message on its Web site a few months ago, declaring, "The 12-year break is over and school is back in session," along with a downloadable live track. Stone Temple Pilots played at South by Southwest to prime the pump for a self-titled album, its first since 2001, due in May. Last year, Alice in Chains released Black Gives Way to Blue, its first studio disc since 1995, with new vocalist William DuVall.

Perhaps most surprising, Faith No More is back. The San Francisco–based quintet evolved over the course of six studio albums between 1985 and 1997 from crude, witty funk-metal to a sonic mélange that contained smooth lounge-pop and grinding thrash. It also showcased the absurdist effects and genuinely powerful singing from smart-mouth vocalist Mike Patton, who has carved out a successful, if cult-sized, solo career since the group disbanded.

Faith No More's music always benefited from the ways its individual elements rubbed uncomfortably against one another. Patton's constantly mutating vocals and Roddy Bottum's light, melody-besotted keyboards were bolstered by Mike Bordin's pounding drums and Jim Martin's gleaming metal guitar work. Their combinations of genres and styles verged on the gratuitous, and the band threw far more sonic curveballs than straight pitches. Its members also seemed to enjoy tweaking rock fans' perceptions, whether by releasing a half-ironic cover of the Commodores' "Easy," using a slot opening for Guns N' Roses to ridicule the whole idea of arena metal, or giving deliberately provocative interviews.

For all these reasons, Faith No More was an extremely unlikely prospect for a cash-grabbing reunion tour. One member has resisted temptation: The lineup that will be playing three nights at the Warfield features the band's final guitarist, Jon Hudson, original axman Martin having given up music for farming. There are no new songs being performed, though the group has opened numerous European sets with a take on Peaches and Herb's "Reunited," and has also essayed covers of the Bee Gees' "I Started a Joke" and Crowded House's "Don't Dream It's Over," adding a few more layers of nostalgia (and ironic posturing) to the whole enterprise.

No matter how much Faith No More may snark, or avoid answering questions — the members refused all interview requests — a reunion tour is equal parts triumph and surrender. Ultimately, that's fine. Great music stays that way despite the context, be it reunion tours or beer commercials. Welcome back, Faith No More. How about a new album in 2011?
Posted by Phil Freeman at 8:31 AM
Labels: alice in chains, faith no more, grand funk railroad, sf weekly, sha na na, soundgarden, stone temple pilots, stooges