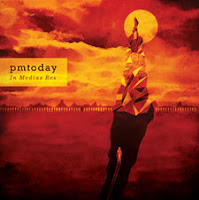 PMToday (who'd like their band name written lowercase, but life is filled with disappointments) are a band of brothers from Arkansas who open their debut album with an acoustic-guitar-driven number about how life is filled with disappointments. The next song starts off, "This is me, neglected and obsolete/I am incomplete." Yeah, they're a happy lil' band. Track titles like "People Are Machines," "I Am Wrong," "Sad World" and "Don't Exist" hammer the message home.

Fortunately, the music doesn't match the mopeyness of the lyrics. The band's funk-rock riffing and blistering tempos recall the earliest Mars Volta recordings, before Omar Rodriguez Lopez decided every flubbed note he recorded deserved its own solo album. PMToday keep it stripped-down and rockin', drummer Ryan Brogan endlessly driving them forward as guitarists Connor and Cuinn Brogan rip through fleet solos and the vocals vacillate between earnest emo belting and genuinely beautiful harmonies. When they get extra-sensitive, as on "I Am Wrong" and "Soma Holiday," the strings and piano bumps them up into classic pop songwriting territory.

These guys are outrageously talented--good-to-great lyricists/songwriters and astonishing musicians (the two don't always go hand in hand). They never settle for screaming and distortion when a more thoughtful approach will yield bigger dividends, but they also hardly ever miss an opportunity to shred. They deserve to be huge; this is one of the best albums of 2010 so far, and a mind-roasting debut.
Posted by Phil Freeman at 10:48 AM
Labels: alternative press, omar rodriguez lopez, pmtoday