THE SECOND BEATLES-RELATED THING I'VE EVER CARED ABOUT 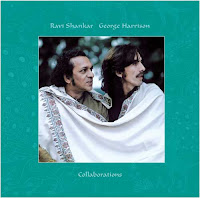 On Tuesday (10/19), Rhino is releasing a limited-edition boxed set (three CDs, one DVD) of Ravi Shankar's collaborative albums with George Harrison. From the press release:

The DVD is a rare concert performance of Ravi Shankar’s Music Festival From India recorded at London’s Royal Albert Hall in 1974. The albums include the acclaimed Chants Of India (1997), The Ravi Shankar Music Festival From India (studio version 1976) and Shankar Family & Friends (1974). The 56-page book includes a foreword by Philip Glass, a history of George and Ravi “in their own words” and rare photographs from both family archives.

The personal and musical friendship between Ravi Shankar and George Harrison has been known and well documented for decades now. It was a friendship that was powerful enough to make an impact on the large, musical life of the late nineteen sixties and it reverberates, as clearly, even today – from the Foreword by Philip Glass

In 1973 George Harrison signed Ravi Shankar to his Dark Horse Records label. The first joint recording project between George Harrison and Ravi Shankar, Shankar Family & Friends brought together renowned Indian classical musicians such as Ustad Alla Rakha, Lakshmi Shankar, and Shivkumar Sharma alongside Western jazz and rock musicians including George, Ringo Starr, Tom Scott, Klaus Voormann, Jim Keltner and Billy Preston. One half of the album comprises instrumentals and songs, while the second half is a thematic ballet to a yet un-staged performance.

Ravi Shankar’s Music Festival From India (live from the Royal Albert Hall) was the first artistic event organized and sponsored by George Harrison’s Material World Charitable Foundation, bringing together a 17-piece Indian classical ensemble as well as a solo sitar performance by Ravi Shankar accompanied on tabla by Alla Rakha.

In 1997 George Harrison and Ravi Shankar again collaborated on an album. This time Ravi created music for ancient Sanskrit chants with the challenge of maintaining the authenticity of the ancient verses. Released in 1997, Chants Of India are timeless, Vedic verses chanted for the well being of man and mankind.

I'm most interested in the Shankar Family & Friends album, because it's a weird, somewhat kitschy blend of Indian music and prog-rock. (In that way, it sort of reminds me of Carlos Santana's weird, mystical albums from 1973-75—Love Devotion Surrender with John McLaughlin and Illuminations with Alice Coltrane in particular, but also Welcome—which have always been among my favorite parts of his catalog, right next to the triple-vinyl/double-CD live disc Lotus. To be honest, I really don't have much use for anything Santana did after 1975.) The songs on its first side are nice, but it's the second side, which is taken up with the score for a never-produced devotional ballet, that's the real hot stuff. The mix of sitar, tabla and harmonium with flute, horns, analog synths and occasional guitars all swirls together into something that sounds like a lost Popol Vuh soundtrack to an imaginary, never-produced, Indian-set Werner Herzog/Klaus Kinski movie. When people describe something as "so '70s," they usually mean it in a scornful, disco-era-Bee Gees way. But this music is totally '70s in a stoned-but-totally-earnest way that yes, screams 1974, but that's a good thing. I've said many times that I'll take music from 1969-75 over music from 1964-68 without blinking. You wait: before the end of the year, Madlib or someone similar will be sampling "Nightmare: Lust" from this album.

I get the feeling that even on Chants of India, the one on which he got co-billing, Harrison's role on the records compiled here was basically that of patron, producer and fan. And that's a good thing, as far as I'm concerned. I was never a Beatles fan, nor a fan of the various members' solo work. (See the title of this post? The only other Beatles-related thing I care about is Live Peace In Toronto, the John Lennon/Yoko Ono album, and I really only like the screechy second half, not the rockabilly covers that kick it off.)

By the way, the packaging on this box is fucking glorious. I'm not kidding at all; the last thing I got that was even half this awesome was the Revenant Albert Ayler box, Holy Ghost, and this doesn't have that thing's annoying aspects, like the pressed flower and all the other stuff. It's just an incredibly beautifully printed hardcover book, some oversized sleeves for the CDs (with poster-ish liner notes) and a magnificent outer case. Plus a "certificate of authenticity" 'cause it's a limited edition. But it's just fantastic to look at. Click the image at the top of this post to see a blown-out picture of the whole thing.
Posted by Phil Freeman at 12:00 PM
Labels: albert ayler, alice coltrane, george harrison, john lennon, john mclaughlin, ravi shankar, santana, yoko ono