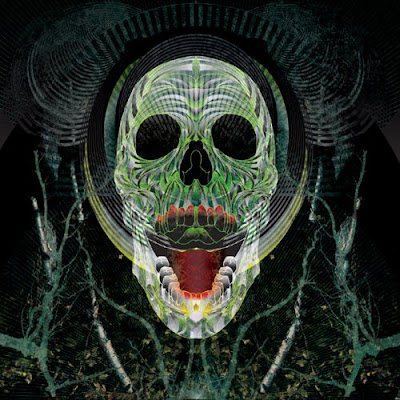 Yakuza vocalist/saxophonist Bruce Lamont released his first solo album, Feral Songs for the Epic Decline, on the At A Loss label in January. That's the cover art above. He did some killer performances to promote it at South by Southwest this past week, and Mike Williams of Eyehategod showed up to help out:

I wrote the liner notes to the CD. Here they are:

Those of you who’ve picked this album up because it’s the solo debut by the frontman for Chicago avant-rock band Yakuza should be aware that you are not holding a metal record in your hands. Of course, if you think Yakuza, Bruce Lamont’s primary creative outlet, is just a metal band, well, I don’t know what to tell you about that. Yakuza makes some of the most absorbing ultra-heavy psychedelic post-rock around, but calling it “metal” would be awfully reductive. You’ve got the Tibetan-style chants, the drone interludes, the saxophone…Yakuza’s got more in common with Hawkwind than High On Fire, is the point here. And apparently, Bruce Lamont is the kind of guy who finds even Yakuza’s expansive musical vision just a little bit constricting.

Most folks who know his work know Lamont has one foot in out-jazz (he’s performed and recorded with saxophonist Ken Vandermark, and stood up to the full hurricane force of upstate New York sax-sax-guitar trio Borbetomagus) and another in out-rock (in addition to Yakuza, he’s been an in-studio guest with fellow Chicago bands Nachtmystium and Minsk). But now they’re gonna get to know Bruce Lamont, singer-songwriter. He wrote all the songs on this disc, and played every instrument: guitar, saxophone, keyboards, percussion, all of it. And as recorded by Sanford Parker in Chicago’s Semaphore Studio, it’s got all the warmth and humanity of the best music to come from that city in recent years.

The first track, “One Who Stands On The Earth,” is also the longest by a good five minutes, and it’s like a buffet, laying out every sound you’re gonna hear for the rest of the album’s 43-minute running time. Acoustic guitar, saxophone, hypnotic tribal percussion, rhythm loops, bursts of static, and Lamont’s own trance-like vocal chants…imagine if Peter Gabriel had invited Michael Gira to collaborate on Passion, his soundtrack album for The Last Temptation Of Christ, and you’re getting there. There’s a strong desert vibe to tracks like “The Epic Decline” and “Disgruntled Employer.” Other pieces, like “The Book Of The Law” and “Deconstructing Self-Destruction,” blast from the speakers full of industrial/black metal fury, while the detuned guitar of “Year Without Summer” could be a nod to the Texas-based outsider-folk recluse Jandek. Feral Songs For The Epic Decline is multifaceted, is what I’m saying. Like its creator. Come in with open ears, and they will be filled in a very pleasing manner.

Buy Feral Songs for the Epic Decline from Amazon