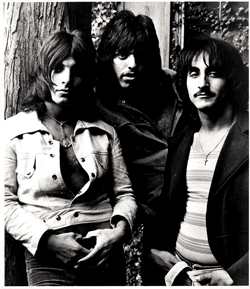 "It was such a crazy thing, to go out of the basement and play Carnegie Hall," recalls Sir Lord Baltimore drummer-vocalist John Garner. "Where does that happen? We were in the fast lane all the way down. . . . I believe that had the element of drugs not been in the picture, we'd be a household name today."

In some households (especially those where drugs are still in the picture), they still are. The Brooklyn band put a uniquely East Coast spin on the late-'60s/early-'70s power-trio sound, combining Cream's instrumental overdrive with Grand Funk Railroad's raw power. It all started when Garner invited his high school acquaintances Louis Dambra (guitar) and Gary Justin (bass) to jam. After about a week, Garner recalls, "I saw an ad in the Voice that said, 'Heavy band needed to record album.' That was it. We put about 10 riffs together, some crazy avant-garde singing and a few beats here and there, and we went down to audition." [Read the rest here.]
Posted by Phil Freeman at 7:53 AM