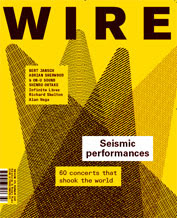 From the "Seismic Live Performances" article:

ORNETTE COLEMAN
Carnegie Hall
New York, USA 2003
I worked alone in a big, echoey warehouse back in the early 1990s, when Beauty Is A Rare Thing, the six CD box of Ornette Coleman's Atlantic recordings, was released. I used to play all the discs that didn't contain the two versions of "Free Jazz" constantly, bopping around to the convulsively swinging rhythms of bassist Charlie Haden and drummers Ed Blackwell and Billy Higgins and marvelling at the way Ornette and Don Cherry seemed to anticipate what each other would draw out of a given tune, even as I had absolutely no idea what they'd play next. But it wasn't until the 2003 JVC Jazz Festival a decade later when I finally got to check him out in person.
My seats were in the first balcony, looking down on stage and audience from a dizzying angle; I could see just how much hair Ornette had lost off the top over the years. Fortunately, I could also hear that he hadn't lost a step since 1959, and was in fact blowing at full strength. My first impression was that he was playing music very similar to John Zorn's manic, double rhythm section tribute to him, Spy Vs. Spy. Each piece was in the inimitable Ornette style, with a singsongy, blues based melody that almost immediately served as the launching pad for a solo of illusory wildness, while the group (dual bassists Greg Cohen and Tony Falanga plucking and bowing respectively, and drummer son Denardo hammering away) kept the whole thing churning at top speed and with unflagging intensity. None of the pieces seemed to reach the five minute mark; each one felt like a starter's pistol had been fired to initiate it, and each stopped on a dime, leaving the audience breathless but Ornette as calm and genial as ever. They were hitting like an arty hardcore group; I was reminded more of Wire or Bad Brains than any jazz group. There were no encores, just an hour of melodic improvisation, airtight and polished to diamond hardness. It was one of the greatest things I've ever seen or heard.

And from the record reviews section:

MY CAT IS AN ALIEN
Leave Me In The Black No-Thing
ROBERTO OPALIO
Chants From Isolated Ghosts
Important
Oh, the perils of choosing the wrong name for your act. The Opalio brothers, Maurizio and Roberto, have been pumping out product at a dysentery-like pace for years, but the sheer silliness of their moniker has just gotta be keeping virtual seas of potential admirers at bay. This latest effort, featuring two tracks in just under an hour, is one of the finest spacerock (though it never exactly "rocks") discs I've heard for a long time. The first half of this album-length piece begins with delicately dissonant guitar skinng that promises heaviness in exactly the way Thurston Moore (a previous MCIAA collaborator) and Caspar Brötzmann have done many times in the past, electronic crunches and something that sounds like a clown moaning through a slide whistle soon enter the mix. It all seems to be getting spacey and Ambient, until the drums come in. They're tribal - not hippy tribal, but like some free jazz drummer attempting to imply tribalism by hitting one tom over and over while going crazy on the cymbals. This continues for a long time. When it stops, more guitar comes in, this time a cross between Keiji Haino's mellower work (think Affection) and Jandek. The second half of the piece is more of the same, only less wacky - the slide whistle is absent, and the electronics hiss like solar winds trying to enter cracks in your shuttle. It's a little less human than before, as though the machines have taken over and are running on autopilot as the brothers head to the fridge for snacks.
Roberto's solo EP, Chants From Isolated Ghosts, begins with five minutes of slowly rising and then descending hiss 'n' hum, accompanied by finger cymbals or some similar small bell-like object. The other three tracks range from seven to 14 minutes long, the whole thing running just over half the length of the MCIAA disc, and it manages to carry just about the same psychic weight, which is to say not much at all. Like most spacerock, this music wafts your brain along with it on its journey, but when you're deposited back in your skull afterward, memories of what transpired are few indeed. It's fun while it lasts, but that's about all.
Posted by Phil Freeman at 5:55 PM