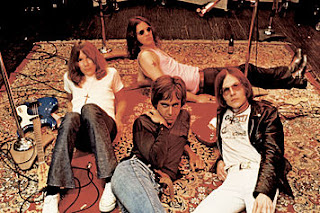 One of these men is dead; the others are just zombies

THE STOOGES
The Weirdness
Virgin
Every once in a while, mostly when David Bowie takes charge, Iggy Pop’s willing to work hard and even stretch himself artistically, whether in the direction of electronic weirdness (The Idiot) or brazen but still brainy pop (Blah-Blah-Blah). The rest of the time, he coasts on name value, content with the most generic three-chord rock as a backdrop. And that’s what he’s doing on The Weirdness, only he’s dragged the Asheton brothers down with him. This album sounds nothing like earlier Stooges efforts, despite the presence of 75 percent of the Funhouse lineup (bassist Dave Alexander died in 1975). It’s one more tossed-off Iggy solo outing, sonically somewhere between Instinct and Beat ’Em Up, with dumb—and probably not dumb-on-purpose—lyrics about women, cars, sex and money (“She Took My Money,” “Greedy Awful People”). Steve Albini was a poor choice of engineer; his trademarked thundering drums worked great for High On Fire, but Scott Asheton’s minimalist thwack gets its power from its crispness. His guitarist brother Ron syncs up well with bassist Mike Watt, but the riffs they’re playing are generic punkarama, using speed to disguise a lack of real ideas. Even the frontman, clearly the one in charge here, seems to have lost it. Iggy’s leonine yawp has grown fragile; he misses more notes than he hits, and the vocals all sound first-take, and not in a good way. Nobody really expects much from an Iggy Pop solo disc. His laziness and inconsistency are givens, at least in the studio (live, he’s still rock’s own Tasmanian devil, all whirling limbs and veins nearly bursting through his skin). But the Stooges (like the New York Dolls, who coughed up a similar and equally lame “comeback” last year) had a solid two-album legacy, and this album sullies that. It’s a shame.
Posted by Phil Freeman at 7:55 AM