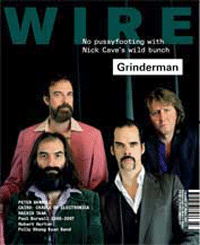 JESU
Conqueror
Hydra Head
Justin Broadrick was a founding member of Napalm Death, but it wasn't until Godflesh that his real vision emerged - mechanistic rhythms (which gradually became more and more groovelike until eventually he hired human drummers), grinding guitars and anguished vocals combined Killing Joke, Swans and Throbbing Gristle into something entirely new and occasionally psychedelic, most notably on Selfless and its companion EP Merciless.
Jesu, Broadrick's post-Godflesh project, maintains the dominant paradigm of his earlier work - big guitars, thumping rhythm (sometimes live, sometimes programmed), aching slowness. But the vocals are cleaner, with less electronic filtering/damage and less metallic riffs (owing more to Mogwai and My Bloody Valentine). Conqueror, their second album and fourth major release overall, is almost lush at times, especially on "Weightless & Horizontal" and "Medicine." He's still the guy walking around with a rain cloud permanently over his head, of course, but a lot of the lyrics here are about love and/or human interaction of a non-spiteful sort.
Ultimately, though, Conqueror is best understood as a series of riffs that you should let wash over your brain without spending too much time deciphering what Broadrick is on about. The guitars (and to a lesser degree the drums and synth drones) are the point of his music, as they always have been. Just lie back and let that oscillating wasp hum at the beginning of "Brighteyes" almost drive you crazy, before the huge riff comes crashing in like a bulldozer falling through your skylight.
Posted by Phil Freeman at 4:53 PM

I'm surprised that, given the way you feel about Isis below, that you feel the way you do about Jesu here. Anyway, I stumbled across your blog from Simon Reynolds', and am frankly amazed. Someone "grown up" writing about metal nondisparagingly! It gives me hope.

surprised here as well, but happy to see this. there seems to be a discontinuity between your live impressions and those of Conquerer. In any case, an awesome album. Have you tried Silver?

I have all the Jesu stuff, even the new EP. I'm still coming to a final verdict about them, but I really feel like Godflesh peaked with Merciless and Selfless and then kept going way too long afterward with less and less to say, so if I do ultimately give up on them it won't be a huge crushing loss to me the way it was, say, when Khanate broke up.