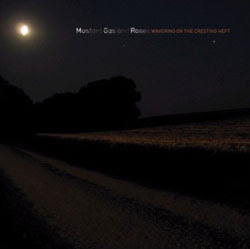 MGR
Wavering On The Cresting Heft
Conspiracy
Boston to L.A. post-metal titans Isis specialize in slowly drifting soundscapes with just enough rif power to keep an audience from totally nodding off. On recent albums like 2005's Panopticon and 2006's In The Absence Of Truth, they've been getting more traditionally melodic, and vocalist Aaron Turner has even expanded his range beyond the flat bark he possessed early on. This is the second solo disc by Isis guitarist Michael Gallagher, following last year's Nova Lux - he's also released Impromptu, a collaboration with multi-instrumentalist Melvins pal David Scott Stone - and it's closer in spirit to group work than he's allowed himself to get before. This means that, despite the presence of the Capricollis Quartet's strings on opening cut "Allusions," what you're basically getting here is an Isis album with no drums or vocals.

And that, in turn, means it teeters on the edge of tedium. There are moments of great beauty on Wavering, especially on "Ruminations Of Before," which mixes delicately plucked individual notes with waves of noise to create an emotionally charged soundscape worthy of Keiji Haino. But ultimately, like so much ambient music, it just winds up making you wonder whether it was really worth it for Gallagher to go to all this trouble (overdubbing, composing gently interlocking sequences of plangently lovely guitar notes, picking just the right effects pedal) for a record likely to send most listeners straight to dreamland. A disc like this should come with a free trial-size packet of pharmaceutical speed, just to make sure the maximum number of purchasers actually hear it all the way to the end.
Posted by Phil Freeman at 11:49 AM