THE DAY THE LAUGHTER DIED, PART 1

Backstory: I've gotten onto the PR mailing list for Magic Circle Music, Manowar's reord label. They've got this fucking gigantic three-day festival happening in Germany (of course) in July, during which Manowar will headline over Def Leppard, Whitesnake, Ted Nugent, Alice Cooper, W.A.S.P., Doro and a bunch of other bands. Manowar will perform two three-hour sets on the last two days of the festival, playing their first six albums in their entirety. Now, I've never been a Manowar fan. I've liked a few of their songs ("Manowar," "Fighting The World," "Gloves Of Metal"), but I've spent more time laughing at their image, onstage demeanor - if you haven't checked out one of their multi-disc live DVD sets, you're really missing out - and "Death To False Metal" rhetoric than actually listening to the music.

But the thing is, I'm one of those people who, if he sees a sizable enough crowd obviously digging something, has to at least give it a cursory investigation. My best friend Ken (RIP) was the same way, to such an extent that he actually went to a giant, multi-day Phish concert held on the same decommissioned air base where Woodstock '99 was held, because as he put it, "I've been ridiculing this band and their fans for years, without ever really listening to their music or giving them a fair chance." Sure, he came back hating Phish and Phish fans with an almost genocidal rage, but he gave it a shot, and I've always kinda admired that. So I briefly considered arranging press accreditation for myself and hopping over to Germany to wallow in three days of beer-soaked power metal madness with Manowar and their insane European fans. But then I decided to take the easy way out, and just listen to the albums. 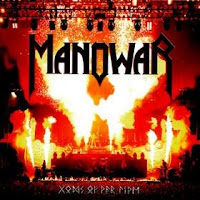 I started out, not with their debut, Battle Hymns, but with a snapshot of what they're like right now: the 2007 double-disc set Gods Of War Live. It's not a live run-through of their most recent album á la Depeche Mode's Songs Of Faith And Devotion Live, mind you (and what a great idea that was: "Hey, guys, nobody really liked our new album - maybe they'll like it better with crowd noise!") - it's a live album from that tour, though, and it features a bunch of Gods Of War tracks on Disc Two. But Disc One is jam-packed with 14 classic Manowar tracks like "Gloves Of Metal," "Die For Metal," "Kings Of Metal" and "The Gods Made Heavy Metal." And yeah, it kicks ass. So with that under my belt, I have moved on to the studio albums. I've made it through the first two, so that's what I'll be talking about today. 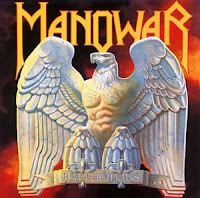 I had heard that Battle Hymns was very different from the rest of Manowar's discography. And it is. It's a late '70s/early '80s hard rock/metal album, collecting a bunch of songs written before metal was a codified style with sonic "rules" (most of which were laid down by Judas Priest between Hell Bent For Leather and Screaming For Vengeance). It basically sounds like a Kiss album, except it's not quite as instantly/cheesily catchy as Kiss's songs were, and - yeah, I'm gonna say it - the playing is better. Especially the guitar solos. There are some unbelievable air-guitar moments on Battle Hymns. 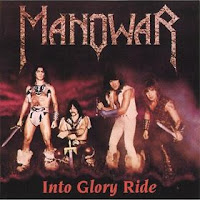 The follow-up, Into Glory Ride, is weirder. It starts off with a hip-hop-like skit where some chick is getting laid, and apparently enjoying it quite a bit, until some dude breaks in on the couple (perhaps discovering his own cuckolding?) and a chase ensues, whereupon the song begins - and the song has nothing to do with adultery, or sex at all. It's called "The Warlord," and it's about the singer being a biker/metal warrior or whatever. So why start off with this baffling that-slut-done-me-wrong vignette? Anyway, Into Glory Ride is probably Manowar's most infamous album cover, because it features a photo of them in their loincloths and furry boots, holding their swords, and the music perfectly matches that art. It's epic (lots of songs about steel and Valhalla and being a warrior), but the production is still rooted in hard rock rather than the power metal ultra-gloss they'd embrace later on. There's still distortion on the guitar solos (which, again, kick ass in a totally air-guitar-inspiring way). But at the same time, if they'd put some kind of typical early '80s van-art cover on the disc, it might have sold better and crossed over way more efficiently than it did - the music is epic in a way lots of other bands were exploring back then. Frankly, I can't find a single thing to object to, a single laughable quality, about the first two Manowar albums. Some of the songs are a little long ("Hatred" didn't need to pass the seven-minute mark), but there's nothing pompous about what the band was doing back in the early days. Later, they became cartoon characters, but man, if you can't rock out to this early stuff, you have no business calling yourself a metalhead.

In my next post, I'll talk about my impressions of the four albums that finish out Manowar's "glory years": Hail To England, Sign Of The Hammer, Fighting The World and Kings Of Metal.
Posted by Phil Freeman at 7:56 PM