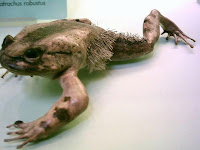 "Amphibian horror" isn't a movie genre, but on this evidence perhaps it should be. Harvard biologists have described a bizarre, hairy frog with cat-like extendable claws.

Trichobatrachus robustus actively breaks its own bones to produce claws that puncture their way out of the frog's toe pads, probably when it is threatened.

David Blackburn and colleagues at Harvard University's Museum of Comparative Zoology, think the gruesome behaviour is a defence mechanism.

The researchers say there are salamanders that force their ribs through their skin to produce protective barbs on demand, but nothing quite like this mechanism has been seen before. [Read the rest here...if you dare!]
Posted by Phil Freeman at 12:17 PM