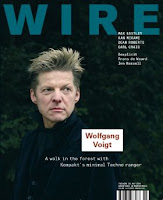 JARBOE & JUSTIN K BROADRICK
J2
The End
This collaboration between Justin Broadrick (Godflesh, Jesu, God, Techno Animal, etc.) and Jarboe (ex-Swans, plus previous team-ups with Neurosis, Byla and others) seems like the stuff of dreams. His massive, psychedelic noise guitar riffs paired with her multiple vocal personalities - what fan of all things heavy, depressive and intense couldn't get off on that? It's too bad the music doesn't live up to what folks are almost certainly imagining.
There's nary a guitar to be found that hasn't been treated with so much electronic processing as to render it nearly unrecognizable as such, and Jarboe's vocals are mostly limited to mantra-like repetitions of single phrases, when there are any lyrics at all - on opening cut "Decay," she ululates a simple, wordless melody. "Let Go" is almost Portishead-like, Jarboe's voice staticky like a cellphone call as an achingly slow drumbeat (one might almost call it Swans-like in its implacable refusal to groove) and mournful, crunching guitars loop behind her.
That's the big trouble with this six-song EP - it was prepared by mail and it sounds that way. Broadrick and Jarboe are kindred spirits in many respects, but the intensity of a project created by two people working together in a room simply can't be matched by uploading wav files to one another's FTP servers. Even the spirited laughter that opens "Romp" can't sustain the illusion of true collaboration. J2 is enjoyable, but there's an essential inhumanity to it.

INSIDE OUT IN THE OPEN
Dir. Alan Roth
ESP-DISK DVD
This hour-long DVD comes adorned with a statement from director Alan Roth, in which he asserts his eagerness "to open up greater awareness of the importance of recognizing the profound artistry in this music." Free jazz needs such proselytizers to survive in a callous marketplace. But mere fervor won't entice new listeners - context must be provided, a story told. This film does neither of those things.
Subtitled "an expressionist journey into the music known as free jazz," Inside Out In The Open makes no attempt to be an authoritative chronicle of the genre's tangled history. Instead, Roth offers snapshots: he follows the improvising quartet Other Dimensions In Music to a few performances and films another William Parker group, In Order To Survive. Archival footage of Sun Ra, Peter Brötzmann and a few other players is inserted here and there, glorious but always too brief, and ultimately it's a snapshot of the New York scene circa 2001, with a few side trips. A fistful of musicians are interviewed - Parker, Shipp, Alan Silva, Marion Brown, Roswell Rudd, John Tchicai, Susie Ibarra and more - but these segments are nowhere near as illuminating as the performance footage. The interviews are presented with no clear link established between them, and no explanation of why these people were chosen and others weren't.
Furthermore, there is no narration, and too many of the musicians talk in Afro-spiritual platitudes rather than explaining how free jazz "works," and why they do what they do. Only a few - William Parker, Roswell Rudd and Joseph Jarman in particular - seem interested in imparting information a neophyte might find useful. The others focus on autobiography or proffer the usual mumbo-jumbo so commonly heard from the stage at the Vision Festival - stuff that will ring in the ears of the converted, but won't sell a single record to a listener not already convinced.
It's the live performance footage that's this DVD's selling point. But no piece is allowed to run its full course, so even on that score the film falls short of what any viewer would wish it to be. This is the great disappointment of Inside Out In The Open, then: it's not a lesson in free jazz, but rather one more testimonial, a fan letting the artists shout their own glory - commendable, certainly, but insufficient.
Posted by Phil Freeman at 4:04 PM