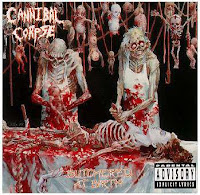 I'm spending this Fourth of July evening watching Cannibal Corpse perform in Toronto - a set recorded 11/15/06, and available on their new three-DVD set Centuries Of Torment: The First 20 Years. Disc One is a three-hour, two-part documentary on the band's history, influence (first singer Chris Barnes was one of the inventors of the ultra-guttural "Cookie Monster" death metal vocal style, and current frontman George "Corpsegrinder" Fisher is one of its paradigmatic practitioners), and sound - bassist Alex Webster finally gets his due as one of the truly great players of this music. Disc Two offers 30 live tracks from seven different live shows dating all the way back to a 1989 hometown show in Buffalo, and seven music videos (including a live version of "Stripped, Raped And Strangled" with the Black Dahlia Murder's Trevor Strnad on guest vocals). Disc Three is a bunch of bonus crap I'll probably never watch.

I think Cannibal Corpse represent what's great about America. Here's a band that records songs like "Fucked With A Knife," "I Cum Blood," "She Was Asking For It," "Five Nails Through The Neck," "Hammer Smashed Face," "The Spine Splitter," the aforementioned "Stripped, Raped And Strangled"...truly, the list goes on and on. And their album covers have to be seen to be believed. Butchered At Birth, which appears at the top of this post, is my favorite, and probably their most famous, but they're almost all at least that good (only The Bleeding and Kill go for subtlety instead of the all-important "holy fucking shit" factor that makes death metal great). Anyway, somehow this band managed to get into Ace Ventura: Pet Detective, one of the biggest movies of its year, and become semi-household names in the process. (Having a name as awesome as Cannibal Corpse helps that process along, of course.) These guys have gone from being a clownish "can-you-believe-that" freakshow to being one of the most respected bands in American metal, a relentless recording and touring machine that consistently delivers killer live shows and music that does exactly what it says on the label. I mean, what do you think a song like "Five Nails Through The Neck" is gonna sound like? Well, that's how it sounds. And though all the bandmembers are absurdly talented - bassist Alex Webster in particular - their technical skills always serve the larger purpose of the song. In their own way, they remind me of Nashville session players. Death metal, because of the particular frequencies and varieties of distortion on the guitars and the vocals, not to mention the speed, just can't ever be all that innovative. It can be a fairly limiting genre, in fact. But the truly great death metal bands, like Cannibal Corpse, have an instantly identifiable sound, and never seem like they're running out of ideas. They wring endless variations on a simple theme, and as long as they keep putting out albums, I'll keep listening to them. They haven't made a bad one yet (though I'd argue Live Cannibalism is ultimately unnecessary, just because of the minimal difference between the studio and live versions of death metal songs - not a lot of jamming going on in death metal).

Happy Fourth of July. Go listen to whatever music represents America to you - Bruce Springsteen, Miles Davis, Britney Spears, whatever. At least for today, I'm sticking with Cannibal Corpse.
Posted by Phil Freeman at 5:51 PM