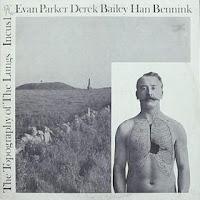 This was the first release on Incus Records, a label co-owned by Bailey and Parker for a while, but then they had some kind of nerdy-British-guy spat. Bailey kept the label, but this record went out of print, and he insisted that it not be reissued during his lifetime. No sooner was he in the ground than Parker reissued it on his label, Psi, with a different cover and billed to himself rather than the collective trio. Stay classy, Evan Parker.

Anyway, I..um...obtained this last week, and have been listening to it in an attempt to get a grip on its legendary status. After a few run-throughs, I like it a lot, but I don't love it unreservedly, and that's mostly due to my strong distaste for Parker's playing. His choked-off style just really rubs me the wrong way; he extrudes these little squiggles and squawks like he's afraid he'll shit his pants if he blows too hard. But at the same time, it's not exclusively his fault - I think that's my problem (my musical problem) with improv as a whole. Since nobody knows what the next phrase is going to be, or where they're "going" or how long it'll take for them to "get there" (in theory, anyway; in reality, every player's got his or her bag of tricks - you can walk into any John Zorn show, for example, with the thoroughly reasonable expectation that at some point he'll press the bell of the saxophone into his pant-leg, blow into the mouthpiece alone, and release long shrieky streams of extremely high-pitched tones), there's no way to build up a head of steam. It's all people listening carefully to each other, instead of settling on a collective goal and going for it. That's why Peter Brötzmann's best stuff, to my ear, is Die Like A Dog or Last Exit, where he's working with jazz- or even rock-based improvisers who are interested in setting up a groove (or at least a riff) and beating the audience about the head and neck with it for 10-15 minutes, or more. The best parts of Topography are the interactions between Bailey and Bennink, like the stretch of feedback and rattling about seven and a half minutes into "Für Peter B. & Peter K." That long moment of near-noise actually sparks Parker's best solo turn on the whole disc; it's an almost foghorn-like maze of twisted tones that, for once, doesn't sound like he's afraid of the horn. Of course, when "Fixed Elsewhere" launches, he's right back into his squiggly (dis)comfort zone. Meanwhile, behind him, Bennink is attacking the kit like it owes him money...which can get tiresome too, I bet, though it never has yet for me.

I don't count this as a life-changing experience or anything (though it might well have been had I heard it back when it was released, or if it was the first thing by Bailey, Bennink and/or Parker I'd ever encountered), but it definitely belongs on the short list of required Bailey listening that I posted a month or two back.
Posted by Phil Freeman at 8:56 AM