[From the St. Louis Riverfront Times.] 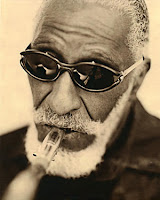 Tenor saxophonist Sonny Rollins is a jazz living legend. He debuted behind vocalist Babs Gonzales in 1949, and quickly made a name for himself by performing with virtually everyone of importance in the genre throughout the '50s, including Art Blakey, Thelonious Monk and Miles Davis.

Albums such as Saxophone Colossus, Way Out West and Freedom Suite took jazz in unexpected directions as he recorded and performed accompanied only by a bassist and drummer, something almost unheard-of for a horn player at the time. The combination of unassailable talent and decades of clean living — he was a heroin addict in the 1950s, but disappeared from the scene for several years to get clean, exploring yoga and Zen in the process — have made him literally one of the last men standing from jazz's glory days.

Despite his near-godlike status within the jazz scene (even John Coltrane admired him so much he recorded a piece called "Like Sonny"), he was humble about his skills — and still is, more than 50 years later. "I don't like listening to myself, so I didn't want to go too deeply," he says about going through his tape archives to prepare last year's Road Shows, Vol. 1, a single-disc compilation of live performances recorded at various concerts between 1980 and 2007, with an ever-changing series of backing bands. "I tried to pick Volume 1 from performances without delving too deeply into the archives...I just picked something that was fairly accessible." He's not sure what Vol. 2 will offer, though the idea of releasing an entire concert isn't out of the question.

Rollins is regarded as one of the greatest improvisers in jazz — on the version of "Best Wishes" that opens Road Shows, Vol. 1, he runs through 35 variations on the song's main theme without blinking. But in conversation with a journalist who marvels at his ability to construct a solo, he responds, "It takes a certain skill to be able to play the same way every night. And I don't have that skill. I can't play the same thing every night. So it's just my lot in life that I'm going to change, and what I play isn't going to be the same."

No matter how much he may change a song in performance, melody is always a constant with Rollins. He's never been a player interested in jarring, dissonant blasts with the horn; instead, he works at the heart of the tune, pulling it in one direction or another, note by note, disassembling and reassembling it but always playing music, not raw sound. It's the key to his musical conception.

"I grew up in the age of the movies," he recalls. "So we used to go every week, and we'd see these Hollywood productions with these musical scores. I remember very early on seeing Swing Time with Astaire and Rogers, and the music by one of my all-time favorites, Jerome Kern. I remember those melodies very well — I had an older brother who played classical violin and an older sister who played the piano and stuff like that, but I got a lot from the movies."

With a discography nearly 100 albums deep, Rollins has a vast catalog of songs, both standards and his own compositions, to draw upon. But as he points out, "musicians don't necessarily like being surprised by a tune," so he tends to rehearse twelve to fifteen pieces before embarking on a tour with a band much younger than he is. "I have no standardized setlist, but I have to restrict myself to that because it's just impractical to have a group of six musicians who know my whole career of 50 years plus," he says with slight resignation. Even at this late date (he turned 79 on September 7), Sonny Rollins is always looking for a way to bring the audience something new and unexpected.
Posted by Phil Freeman at 6:33 AM