KEITH JARRETT: AN EXPLORATION, PART 3 OF 8

Day Three of my journey through the Impulse! albums by Keith Jarrett's group with Dewey Redman, Charlie Haden and Paul Motian. To recap: Fort Yawuh - adventurous and interesting; Treasure Island - super '70s, somewhat indulgent, but very accessible. Today, we discuss Jarrett and co.'s follow-up to the listener-friendly Treasure Island, Back Hand, an album whose title seems to encapsulate the band’s attitude toward their listeners – they really seem to be giving us the back of their hand on much of this disc. 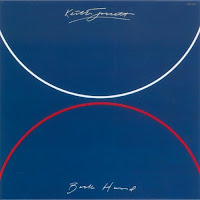 We begin with “Inflight,” a nine-minute sprint on which Jarrett’s piano playing is based around stride rhythms, while Redman spins out a long and complicated melody. The two compete for space, playing aggressively and rather freely for the full length of the piece as Haden and Motian spin their wheels in back. This track reminds me of Ornette Coleman’s Science Fiction, in large part because Haden and Redman are playing in a manner similar to what they offered on that album and Broken Shadows – bluesy and hard-swinging, but also seeming to hover in place rather than charge forward. Despite Jarrett’s frenetic outpouring of notes, the piece seems static; it never goes anywhere, though it’s very pretty and a lot of fun while it lasts.

“Kuum” begins with some sort of wooden flute and various shakers and hand-held percussion devices. Haden starts bowing madly as the flute offers endless repetitive variations on a single phrase that eventually give way to long breathy tones. Eventually, Haden stops bowing and begins plucking the bass, and it sounds like metal cables being hit with a wrench. There’s lots of percussion all around him (including that annoying squiggly instrument I talked about yesterday), and occasional outbursts from reed and/or flute. No piano at all. This is the sort of thing a live audience would put up with, but does it belong on a studio album, particularly for almost 12 minutes? I’m not sure. It’s not something I’d listen to twice.

The album’s third track, “Vapallia,” is piano trio plus percussion, very melodic and baroque and easily the most conventionally beautiful track thus far. My guess is that it probably kicked off Side Two on vinyl.

The title track (sort of – it’s written as “Backhand,” but the album cover has the two-word version) sends Jarrett back into Vince Guaraldi territory, and when he and Redman duet on the melody it’s very nice stuff indeed. Later on, it gets even better; Jarrett’s solo is like a waterfall landing on highly polished glass, sending bright outbursts of light shimmering in all directions. Very nice. I’m not sure whether Paul Motian did something to piss off the engineer or this was just The Way Things Were Done in the early ’70s, but he’s way too far back in the mix to have any real impact on things. I’m willing to believe that his bandmates could hear him at the time Back Hand was recorded, but those of us experiencing it after the fact would like to know he had more than cymbals at his disposal. Also, this track could have been less than 11 minutes long, but I’m not sure what I’d cut.

This is definitely my least favorite of the albums thus far. As enjoyable as some parts of Back Hand are, they seem mostly to be recordings of the musicians playing for themselves and each other, rather than the listener, especially “Kuum,” and frankly, they disappear from memory almost as soon as they’re over.

That's it for today; tomorrow, Death and the Flower, recorded at the same sessions as Back Hand.
Posted by Phil Freeman at 10:25 AM