KEITH JARRETT: AN EXPLORATION, PART 4 OF 8

By now, you know how this goes: Another day, another Keith Jarrett Impulse! album. Today, we’re digging into Death And The Flower, the follow-up to Back Hand and the product of the same recording sessions. 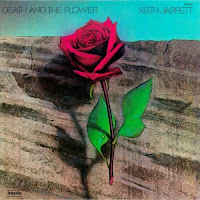 This disc only has three tracks; the nearly 23-minute title track, the 10-minute “Prayer” and the almost nine-minute “Great Bird.” The first of these starts with percussion and flute, but before long Charlie Haden comes in with some very nice, seemingly Indian-influenced bass plucking, and when the piano and saxophone join (with Paul Motian in back focusing on cymbals and bells and stuff rather than drums) it reminds me more of John Coltrane’s 1961 Village Vanguard recordings than anything I’ve previously heard from this group. More or less at the 10-minute mark, Motian begins enforcing rhythm, and the piece starts to pull together – it’s been quite beautiful in a meditative way all along, but almost exactly at the halfway mark, it starts to swing. Jarrett spins out a few phrases that remind me of Billy Joel at around the 15-minute mark, which I don’t mean in a bad way – you’re just gonna have to take my word for it. This whole piece is excellent, except for Haden’s solo, which doesn’t really go anywhere, and the transition to a suddenly much more uptempo and active mode in the last three minutes, which works but seems unnecessary. As with “Kuum” from Back Hand, it seems like these guys weren't always able to tell the difference between the kind of thing that can work really well in a live context and the more concise, singular ideas that make for good album tracks.

“Prayer” is almost a solo piano track, except for some barely perceptible bass in the deep background starting around the halfway mark. It’s really beautiful, and I don’t have much more to say about it than that. It’s one of the best tracks from this whole string of albums so far.

“Great Bird” gets everybody going right away – piano, bass, drums, tables or bongos, and two saxophones, which must have been overdubbed afterward, because in the past, Jarrett has played soprano sax only when not playing piano. In this case, the piano continues as two saxophones duet with each other in the far left and far right corners of the mix. At some point that whooping percussion instrument I've mentioned in previous posts makes another appearance, and at this point I’ve decided it sounds more like a small monkey than a dog, for what that’s worth. It's still annoying. “Great Bird” surges and drops back, waxes and wanes, finally ending with everybody slowly dropping away except for the percussionist(s) and Haden. It’s a nice piece, a great counterpart to “Prayer,” and it ends this album very naturally. Other than a few missteps on the title track (notably, the bass solo and the final fast section), Death And The Flower is probably the best of the albums so far. At worst, it’s a tie between this one and Fort Yawuh, and that’s only because Fort Yawuh is a double album with more really good tracks to choose from.

So that's that. Tomorrow, Shades.
Posted by Phil Freeman at 11:51 AM

I'm enjoying this - thanks!