FIVE QUESTIONS WITH A TERRORIZT 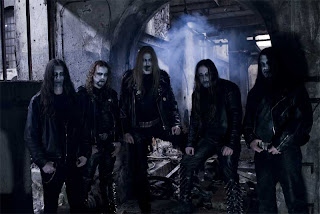 In recent years, French black metal has earned a stellar reputation within the global metal community thanks to adventurous bands like Deathspell Omega, Blut Aus Nord, Antaeus and Spektr. These groups, working anonymously and refusing interview requests, make complex, philosophically rigorous music that expands the parameters of the genre in almost every respect: Songs are long and multi-part; the usual buzzsaw guitars and pummeling drums are supplemented by industrial/gothic atmospheres; and the lyrics forgo rote Satanism in favor of in-depth questioning of the religious impulse. A five-piece black-metal band from Paris, Merrimack does none of these things. The band's three albums (2002's Ashes Of Purification, 2006's Of Entropy and Life Denial, and this year's Grey Rigorism) offer primitivist black metal that will be familiar to anyone who's heard older albums by Mayhem, Darkthrone or Marduk — the latter of whom Merrimack are currently supporting on tour. And unlike some newer black-metal bands that have abandoned the black-and-white "corpse paint" that has marked the genre since its early-'90s explosion, they appear in leather and spikes, fully painted up. Since this is Merrimack's first trip to the U.S., we asked them what they thought about America's position in the black-metal scene. Singer Jan "Terrorizt" Desaegher provided some surprisingly funny and pleasant responses.

What are your impressions of America? Is it everything you were expecting?
We didn't expect anything special, to be honest. The Western world is the Western world. It's not that different from Europe, except that the people are fatter and the cars are bigger. Nothing too exciting. We have enjoyed some places so far, like the Northeast, Montreal and Austin. The rest has been rather disappointing. But we're right in the middle of [the tour], and many places remain to be discovered and conquered.

Black metal seems connected to pre-Christian or early Christian ritual and philosophy, which makes it a natural outgrowth of European countries where history goes back a long way. Do you think black metal can flourish in a country as young as the U.S.?
I don't know if I really agree with your statement. If you're referring to all these pagan bands who miserably try to get connected to the invincible cult of black metal and its abominable aura of discomfort, disgust and danger, then I have to clearly disagree. Black metal is attuned to the darkest side of spirituality. Period. Nations don't matter much when it comes to black metal. Good bands can come from all over the world: France, Sweden, France, Sweden or even France. It doesn't matter.

This is your first U.S. tour. How have audiences been treating you?
Generally, the response has been very good. Some audiences were really violent and motivated. Some others were sadly a lot more lazy. But be sure, every city visited has been submitted and conquered.

Black metal has been undergoing a lot of changes in recent years, particularly in France with bands like Deathspell Omega, Blut Aus Nord and others. Yet Merrimack remains committed to a more primitive, older-style sound. Why is that, and what is your opinion of the changes in the black-metal scene, both in France and worldwide?
Black metal, like any artistic movement, is bound to evolve. There's nothing wrong with this. We've added some new elements to our music on our latest album, and more will probably come. We respect bands who dare to evolve, with the ability of doing it right. Let me tell you, they're not numerous.

Some of the bands you're touring with, like Black Anvil, play black metal but don't maintain the visual style. How important is corpse paint in 2009, and what is Merrimack's feeling about it generally?
We stick to it; we're traditionalists. It's up to every band to see for themselves. We won't despise a band just because they don't wear corpse paint. This would be far too superficial. As long as the right aura is conveyed, there's no reason to complain.
Posted by Phil Freeman at 6:00 AM