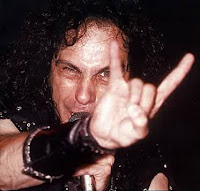 Legendary metal singer Ronnie James Dio passed away early Sunday morning, May 16, from the stomach cancer he'd been battling since November 2009. The 67-year-old Dio had one of the greatest and most recognizable voices in metal history. His career began in the 1950s, fronting various rockabilly and R&B groups (Ronnie and the Red Caps, Ronnie and the Prophets) in upstate New York. "When you start, you do cover material, and whatever happened to be around, we did it," he told me in an interview last August. "We did a lot of blues, a lot of R&B material very popular back East—people like Sam Cooke, Jackie Wilson, the Isley Brothers, James Brown, those kinds of people. You did what was put in front of you."

Dio really found his niche in the early '70s, though, first with the boogie/Southern-rock-style band Elf and then alongside former Deep Purple guitarist Ritchie Blackmore in Rainbow. With his theatrical outfits and dramatic, sweeping gestures, not to mention his astonishingly powerful voice, he established a persona far larger than his relatively small physical stature, stalking the stage and commanding the audience's attention at all times.

After leaving Rainbow in 1978, he moved on to front Black Sabbath, and in so doing reshaped that legendary band in his own image. "When we did 'Children of the Sea,' I think that was the first one we wrote together, and that showed that I was more than capable of doing it," Dio recalled about taking over as Sabbath's lyricist. "And Geezer [Butler, bassist and primary lyricist during the Ozzy years] really didn't want to write. When I came in, he said, 'You're gonna write the lyrics, aren't you?' and I said, 'Well, I certainly hope so,' and he said, 'Oh, thank God, that's one job I never wanted.'"

Where the band had been focused on doomy rock and relatively down-to-earth lyrical concerns with Ozzy Osbourne up front and Butler doing most of the writing, when Dio joined, he brought his own interest in heroism and myth to bear on the albums Heaven And Hell, Mob Rules, and Dehumanizer. Last year, that lineup of Black Sabbath, now renamed Heaven And Hell, released one of 2009's best albums, The Devil You Know—a stunningly heavy, operatic meditation on mortality and doom, by four guys who helped invent a genre and got back together to show the youngsters how it's done.

But no matter how heavy the music was, Dio's fundamental optimism always shone through. "None of the songs end with 'OK, and now we're going to die,'" he told me in that conversation. "My manner is always to let people know that someone out there feels the same, and luckily I've got a stage to speak for them."

Of course, Dio also achieved solo stardom in the '80s, with albums like The Last In Line, Holy Diver, and Sacred Heart, and classic metal anthems like "Rainbow In The Dark," "The Last In Line" and "We Rock." I was lucky enough to see him live three times—first on his Sacred Heart tour in 1986, then as the middle act on the bill (between Motörhead and headliners Iron Maiden) in 2003, and finally in 2008, fronting Heaven and Hell on the Metal Masters Tour with Judas Priest, Motörhead and Testament. The latter show was my then-eight-year-old nephew's first concert, and I'm really glad he was able to see a true legend perform. The world of metal has suffered a great loss; we'll never see another performer like Ronnie James Dio.
Posted by Phil Freeman at 1:09 PM
Labels: accept, black sabbath, geezer butler, iron maiden, jackie wilson, james brown, judas priest, motörhead, ozzy osbourne, rainbow, ritchie blackmore, ronnie james dio, sam cooke, testament, tony iommi

well said. he will be missed.