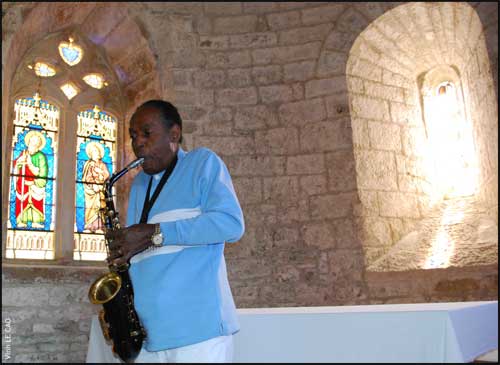 (Above: What might be one of the last photos of Noah Howard, taken in August of this year.)
Saxophonist Noah Howard died on September 3. There's a great tribute post, with lots of rare music, at Destination: Out. I interviewed him back in 2006, for The Wire, and found him to be one of the nicest guys I'd ever spoken with, right up there with Charlie Haden. The story can be found in my book Sound Levels. Right now, though, The Wire has posted the complete transcript of our conversation at this link. Here's a little bit:

How did you get started when you came to NYC?
I always want to pay tribute to Sun Ra, because when I came to this town I was a really young kid, and I didn't have enough experience, and even if I had, I couldn't get into Basie's orchestra in the reed section, I couldn't get into Ellington's orchestra, and Sun Ra had the only orchestra. So we all played in the Sun Ra Arkestra. And I loved it - he taught me a lot of things. One minute we would be playing a Fats Waller thing from 1926 and then he'd go flip-flop, and we'd be into space. He trained and helped a lot of guys. Marion Brown played in that band, even Pharoah [Sanders] played in that band from time to time. And [John] Gilmore was a master saxophone player, a monster. Me and Marshall Allen, we're still friends. The last time I met Marshall, I was going to Boston to do a gig and he was going to Amherst for a gig. We spent the whole hour on the train talking. Cause we all come out of that era, and we love each other. We're survivors, cause most of our friends have gone to musicville - the upper room.

So how did you get signed to ESP?
Me and Albert Ayler were very good friends. Very, very good friends. And Albert was the star at ESP at that time. Everybody was working on the Lower East Side - we were all working at Slugs, on Third between C and D or something like that. That was the Birdland of the new music at that time. And Albert knew what I was doing, he heard me. I was working my way up from the bottom. They wouldn't give me a week, they would only let me play on Sunday afternoons, and then both Sunday and Mondays, and gradually moving up the ranks like that. The other guys were a little bit older than me, like Pharoah and all those guys, so they got the big slots. So what transpired was, Albert was like the Sonny Rollins of this new label that was putting everybody out. So he said, 'Listen, call this guy and go see him.' Bernard [Stollman] was living on Riverside Drive in the upper 90s. Albert told me to send him a tape, so we recorded some stuff from a rehearsal, he put it on and sat there and listened and after about sixty seconds, he said 'So when do you want to record?' I said, 'Excuse me?' This was on a Saturday, and he said, 'Is Monday okay? Are you available Monday at 10 AM to go in the studio?' So I said yes, and went out shaking. This guy had just offered me a recording contract! We had been rehearsing, the band was together, but it just hit me in the face because I didn't know it was coming down.

And here's the link again. Go check it out. Howard was a smart, funny dude, and his music is well worth your attention. His two ESP-Disk albums, Noah Howard Quartet and At Judson Hall, are available as digital downloads, The Black Ark

is in print on CD from the Bo'Weavil label, and some other stuff is out there here and there. Dig in.
Posted by Phil Freeman at 5:06 AM
Labels: albert ayler, charlie haden, john gilmore, marshall allen, noah howard, pharoah sanders, sound levels, sun ra