Kiss, with The Academy Is... and The Envy
Blossom Music Center, Sunday, September 12 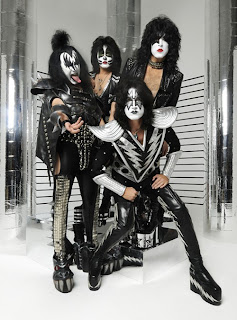 sounds like? Didn't think so. But don't worry about it — Kiss are keenly aware that they're a retro band and have been since they put the makeup back on in the mid-'90s. That's why something like 80 percent of their live show is made up of songs recorded before 1980. (That song you don't recognize that they're opening sets with? That's "Modern Day Delilah," Sonic Boom's single.) Kiss have always known what their fans want and they slap it down in front of them, in super-sized portions. It's the musical equivalent of a giant greasy bacon cheeseburger served by a waitress in platform boots and a thong bikini. Sure, they've slipped a few times — Kiss Meets the Phantom of the Park, Music From the Elder, maybe the whole no-makeup era — but in a lot of ways they're the ultimate American rock & roll band. Bruce Springsteen might play for three hours, but does he breathe fire? No, he does not. Plus, he keeps breaking the mood with acoustic songs that bum everybody out. Paul Stanley, Gene Simmons, and their support staff know better than to pull that kind of bait-and-switch. A Kiss show is about explosions, lasers, fire, blood, and songs you can shout along with. And when you leave, you'll do so knowing you've been entertained.
Posted by Phil Freeman at 7:48 AM
Labels: bruce springsteen, gene simmons, kiss, paul stanley, the academy is, the envy