THE BAND IN HEAVEN, THEY PLAY MY FAVORITE SONG 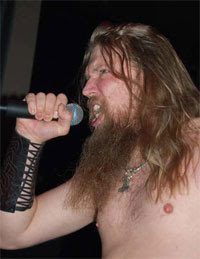 Paperthinwalls has posted its year-end roundup, with every song downloadable so you can burn a nice 2CD holiday mix. My choice - Amon Amarth's "Runes To My Memory" - is toward the end of Disc Two.

Speaking of Amon Amarth, I saw them live last night, as the capper to my birthday weekend (I turned 35 yesterday). They played the Nokia Theatre, opening for Children Of Bodom (who I like, but didn't stick around for) along with Gojira, and Sanctity (who I deliberately arrived too late to see).

Gojira were good; heavier and faster than I'd remembered from listening to their newest album, From Mars To Sirius. Their riffs were almost Meshuggah-esque at times, while other times they stuck to a fairly routine Helmet-meets-Slayer thrash style. They're from France, but you couldn't tell by listening to them. Even their between-song patter was unaccented. I gotta download find a store that stocks their first two albums sometime soon; they impressed me.

I was there to see Amon Amarth, though. I saw them on their Versus The World tour in 2002 or so, at BB King's - one of five shows the Metal Gods tour (Halford, Immortal, AA, Primal Fear, maybe one more act I'm forgetting now) got to finish before the money ran out, or somebody's manager fucked somebody over some way or other - anyway, it fell apart all of a sudden after NYC, and since Immortal broke up not long after, I've always felt privileged to have been there. Even within the tight confines of BB King's, Amon Amarth were great, and won me over on the spot. The triple live DVD, Wrath Of The Norsemen, released earlier this year, showed them in their prime, though, headlining in Europe (numerous festival gigs, too) before ravening thousands-deep crowds. So I was really looking forward to seeing them on the Nokia's larger stage, and they delivered.

They're a pretty stripped-down band, both musically and literally: the singer and bassist play shirtless, while the guitarists play in plain black T-shirts and jeans, and it's hard to see the drummer behind all the cymbals. Their sound is death metal, without any of the fancy time signature changes or wheedly-deedly solos; they're very much about chugging, machine-like riffs and occasional outbursts of Iron Maiden-style dual lead guitar arpeggios. Johan Hegg's vocals are guttural, but clearly comprehensible, which makes sense because he's always singing about Viking life and heroic exploits, rather than sociopathic wallowing in serial rape/murder or cartoon Satanism. (They're Norse, not Christians, after all.)

The set was 40 minutes, tight and energetic from beginning to end. They began with the same one-two punch of their new CD With Oden On Our Side: "Valhall Awaits Me" into "Runes To My Memory." They followed that with the song I, and most of the yelling dudes immediately behind me, wanted to hear - "Death In Fire," the single and opening cut from probably their best album, 2002's Versus The World. That was as far into their back catalog as they went; every song they played came from their last three albums. "Death In Fire" was followed by "The Fate Of Norns," the title track from their 2004 disc. Then we got two more from the new album - "Asator" and "Cry Of The Black Birds," with taped ravens screeching on the intro and all. The last two songs of the set were "An Ancient Sign Of Coming Storm," the Fate Of Norns opener, and "The Pursuit Of Vikings," from that album. And that was it, they were out, and so was I. I was there for Viking metal, not Children Of Bodom's keyboard-heavy prog/power-thrash, fun as it can be in the right mood. I'd really like to see Amon Amarth play a two-hour headlining set, including tracks from their first three albums - Once Sent From The Golden Hall, The Avenger and The Crusher, as well as other recent favorites like "Thousand Years Of Oppression," "For The Stabwounds In Our Backs" and "Versus The World," but this short, concentrated dose was just what I needed last night. Hail the Vikings.

This post's title comes from "Heaven," by Talking Heads. I used it not because it had anything to do with Amon Amarth, but because my birthday also used to be my favorite aunt's birthday. She passed away a few years ago, and slightly less than a week afterward, I was riding the train to work and "Heaven" (the Stop Making Sense version) came up on my iPod, and I almost lost my shit. That song has always made me think of her, ever since, and it was playing in my head late last night as I was falling asleep.
Posted by Phil Freeman at 7:49 AM