CURRENTLY IN THE WIRE 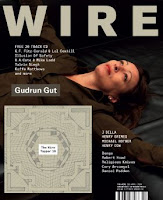 LISLE ELLIS
Sucker Punch Requiem: An Homage To Jean-Michel Basquiat
Henceforth
If somebody dies young enough, they can become whatever you want them to be. Lisle Ellis, a musician and occasional painter, regards the late artist and occasional musician Jean-Michel Basquiat as a kindred spirit, and has assembled a disconnected, atmospheric shrine on this CD. The overtly 'jazz' tracks making up the bulk of the album are very pretty indeed; saxophonist Oliver Lake and trombonist George Lewis dance gracefully together, and drummer Susie Ibarra is a good match for Ellis's subtle basslines. Pianist Mike Wofford picks at the melodies like a fussy eater, and Ellis's wife, flautist Holly Hofmann, adds delicacy to a stately post-bop group sound.
But more than that, she gives the ensemble what uniqueness it possesses. Ellis's melodies are similar enough to those heard on discs by Greg Osby, Jason Moran, Steve Lehman, Vijay Iyer and other New York performer-composers of the moment that without the presence of Hofmann's flute, blindfold testing would be difficult indeed. The nearly nine-minute "Las Pulgas (Repelling Ghosts)" could be a track from any one of a dozen recent albums. It's all well played, but ultimately inessential. Five brief, glitchy electronic interstitial pieces appear, with no obvious relationship to the main music. Only on the final track do vocalist Pamela Z's gnomic utterances, reminiscent of AGF's experiments in fractured language, add more than ballast for the album's titular conceit - making the record in some small way memorable. Pretty isn't enough.
Posted by Phil Freeman at 11:00 AM