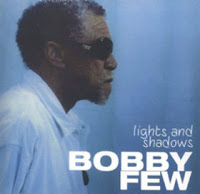 BOBBY FEW
Lights And Shadows
Boxholder
Bobby Few and his pumpin' piano have been heard on a fistful of classic or underrated free-jazz albums, from Albert Ayler's Music Is The Healing Force Of The Universe to Frank Wright's Church Number Nine and Uhura Na Umoja. His two-fisted, keyboard-sweeping style blends gospel fervor and avant-garde expressionism into an often breathtakingly beautiful tidal wave of sound that seems to draw equally from Cecil Taylor and Fats Waller. Few's new solo album is occasionally a meditative affair, as albums of (mostly) unaccompanied piano frequently are, but he's lost nary a step in the decades since recording the legendary slabs cited above. And his still-powerful impulse to pummel the instrument, and the listener, into submission comes to the fore more often than not. On the disc's opener, "Bells," Few overdubs whistle and bells, but otherwise it's 10 fingers and 88 keys, all the way. On the gentle-ish "From Different Lands," he gets into some almost classical territory, rumbling at the low end of the keyboard in a decidedly intimidating manner. This ain't no easy listening dinnertime background music. "Enomis," on the other hand, easily could be. The title is Few's wife's name spelled backward, and the piece is lush, romantic, and reminiscent of Thelonious Monk's "Crepuscule With Nellie" in feel if not melody. Ultimately, this is a beautiful and multifaceted disc showcasing a pianist who should be a god to far more jazz fans than he presently is. 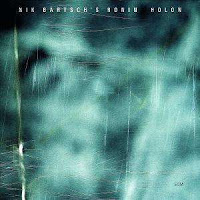 NIK BÄRTSCH'S RONIN
Holon
ECM
The fourth studio recording, and fifth album overall, by Swiss keyboardist Nik Bärtsch and his spidery, minimalist funk group Ronin is possibly the band's most subtle work to date. Bärtsch hasn't changed his compositional style - he's still working with tiny melodic and rhythmic cells that vary ever so slightly over the length of a piece, but he's abandoned his Fender Rhodes for acoustic piano, which gives the music a delicacy, and a humanity, occasionally missing in the past. Albums like Randori and Rea featured compositions - Bärtsch calls them "Moduls," and they're numbered - that sounded like they were played by tiny, wind-up stainless steel spiders. But Holon, in a manner befitting its title, seems to glow with an inner light. In the liner notes, he compares the band to a school of fish, making collective decisions and moving in one direction or another, as one, in a fraction of a second. That's a fascinating analogy, but perhaps a better one would be to the ocean itself, as the band's improvisations and the members' reactions to one another are frequently invisible. This music has a calm and an utter absence of hesitation that makes it feel like the product of a single mind rather than a group. And that's an astonishing achievement. Holon is a quiet and infinitely patient album, one that seeks to lure you in rather than bludgeoning you with excessive rhythmic force. The more you listen to it, the stronger its grip on you becomes.
Posted by Phil Freeman at 9:22 AM