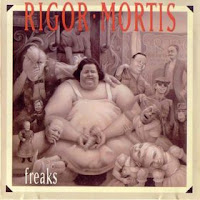 I've been listening to a whole lot of thrash, old and new, in recent months, and it's bringing a whole bunch of bands back to my mind after long absences. Even that wasn't enough to make me recall Rigor Mortis, though; it wasn't until I did a recent phone interview with Ministry's Al Jourgensen, discussing the band's upcoming farewell tour, and he mentioned "Mikey, our guitarist," referring to Mike Scaccia, formerly of RM, who joined Ministry in time for the Mind Is A Terrible Thing To Taste tour, making his studio debut on the "Jesus Built My Hotrod" single and the subsequent Psalm 69 album.

It's clear from "JBMH" and its B-side, "TV Song," that what attracted Jourgensen to the Texan guitarist was his sheer blinding speed, which, for my money, is best demonstrated on the five-song Freaks EP that RM released between their self-titled (and inexplicably major-label-sponsored) debut CD, in 1988, and 1991's swan song, Rigor Mortis Vs. The Earth. It's five songs (six if you count "Six Feet Under" and "Worms Of The Earth" separately, even though they're a single CD track) in 26 minutes, and features some of the most hypnotically head-down, carpal-tunnel-inducing guitar this side of Orthrelm's OV or Behold...The Arctopus. Seriously, I can't believe Scaccia's fingers didn't just fly right off. Nobody else in the band is playing at nearly his level; sure, they're just as fast as he is, but their work doesn't have the weird little fillips his does. The drummer just pounds away in an almost D-beat fashion, and the bassist does that a-million-of-the-exact-same-note thing that's the thrash equivalent of a jazz bassist just walking while everybody else solos. The vocalist is okay, but nothing special. Ultimately, this EP (and Rigor Mortis's entire discography) is all about the breathtaking guitar work.
Posted by Phil Freeman at 12:38 PM