I'm gonna start by saying that the recent wave of '70s Africana compilations (starting roughly at the turn of the millennium with 2001's three-disc Nigeria 70, but really kicking into high gear in the last two years with Lagos All Routes, Lagos Chop Up, Ghana Soundz vols. 1 & 2, World Psychedelic Classics 3: Love's A Real Thing, the three volumes each of Golden Afrique and Nigeria Special and now African Scream Contest, plus a bunch of others I'm not aware of, I'm sure) are awesome, and have been kicking my ass for a couple of years now. But some of the most recent compilations have been, I think, a little deceptive in their packaging.

The traditional "world music" audience isn't interested in a compilation of '70s Afro-psych-rock. They prefer the relatively genteel side of African music - Youssou N'Dour, Salif Keita, folks like that who are entertaining but never raucous or wild. The kind of stuff you can put on in the background while you enjoy a nice bowl of tofu stir-fry. (This isn't just me being a snide jackass; I recently interviewed Miles Cleret, head of Soundway Records, who said pretty much the same thing.) So if you're gonna dig this stuff enough to try to sell it to other people (as Cleret does - Nigeria Special and Ghana Soundz are both on his label, as is the earlier Afro Baby), you've gotta know your target audience, and in this case it's young (mostly white) hipsters, folks who come from a background of punk and garage rock and might potentially be willing to hear those same sounds played by Africans.

Which is where the packaging comes in. And frankly, some of these recent discs don't look like they sound. 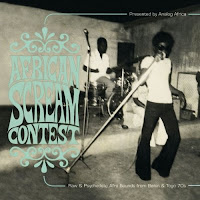 African Scream Contest is the most egregious, to my eye. I just heard it this morning, and the title and cover art (at left) really don't reflect what's actually contained on the disc. You would think, for example, that there'd be lots of, you know, screaming - harsh, James Brown-esque vocals on top of hard funk grooves with scorched acid-rock lead guitar. There's a little bit of that, but for the most part African funk and rock just isn't as crazy as the artwork implies. I mean, look at the cover to African Scream Contest - it's like a cross between an early Fat Possum release and a Stooges bootleg. The songs, though, are uptempo funk with punchy horn charts and call-and-response vocals - the usual African thing. 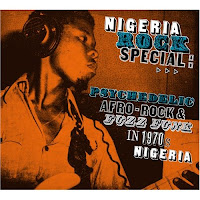 African Rock Special closes the gap between sound and image a little better; songs like the Hygrades' "In The Jungle" or Joe King Kologbo & His Black Sound's "Another Man's Thing" have all the Afro-punk-funk zap you could want. But they're the exceptions, the harshest tracks on what's generally a funky album with some distortion around the edges. So again, the cover art seems a little excessive - it looks like a Mikey Dread/Clash single or something.

Granted, the Analog Africa and Soundway people are using existing photos, and they're not exploiting anyone monetarily - I have it on good authority that everyone gets paid. So why does this image-making bug me? I don't know - in a way it's no different from the way old rockabilly tracks are reissued in packaging that makes it seem like every redneck who found his way into a recording studio in the 1950s was some kind of Benzedrine-crazed killer who put down his switchblade just long enough to bash out a three-minute lust-rant. That's no more true than the idea that '70s Lagos was full of acid rockers who could have given Funkadelic a run for their money. Ofo The Black Company aside, that's just not the way things were. And like I said, these are awesome records well worth anyone's attention who feels like checking them out. Just don't come in expecting proto-punk from African Scream Contest, or a Yoruba version of "Super Stupid" on Nigeria Rock Special.
Posted by Phil Freeman at 12:36 PM