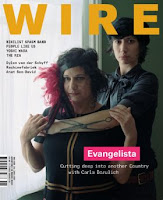 PAN SONIC
Kuvapukti DVD
Blast First Petite
I remember being underwhelmed by Pan Sonic back when their name still had two 'a's in it. Their chilly Finnish art students' version of techno had little of the kick of the stuff actually played in clubs, nor was it noisy enough to satisfy the Merzbow-loving side of me.

I saw them live in May 2000, opening a Wire reunion show at New York's Irving Plaza. I recall two silent men onstage with a tabletop's worth of electronics that looked hand-built (as advertised in rapturous press clippings from the time of Kulma, the album I'd bought and which had so disappointed me). They flipped this, twisted that, fiddled with something else, and the club was filled with a roar that seemed almost visible - and had it been visible, it would have been gunmetal gray and solid as a wall. The sound changed tremendously over the course of their time onstage ('performance' seems a wildly exaggerated description of what they did up there), with waves of click and swoosh and zap running over an audience equally divided between the rapt and the jaded.

At first, I didn't think I was getting the point of it all; the austerity felt a little forced and a little contemptuous. Were these somber Finns just having us all on? When Wire took the stage, though, the double bill's complementary nature revealed itself. Wire stood frozen in place with near-Kraftwerkian impassivity, cranking out mechanistic run-throughs of the old songs - as aloof as their Finnish tourmates, but in the service of arty punk rather than artsy techno.

The raw material for this DVD was filmed on a Pan Sonic world tour, one year before I saw them in New York. Presumably the Irving Plaza show wasn't a fluke, because there's almost no actual performance footage offered here; instead, it's a continuous flow of staticky swirls and zooming electronic clusters, all in lush black and white, strobing and pulsing (there's a warning to epileptics on the package) in time with the music and occasionally adding an element to it. But iTunes' Visualizer function already does this, so the only real selling point of this is the ability it offers to view portions of the program from multiple angles. That's nice, though I couldn't find the correct button on my remote control to make it work.

Ultimately, what I took away from Kuvapukti (Finnish for cathode ray tube) was a greatly increased appreciation for their music, which is much funkier and more compelling than I recall it being in a live context, eight years ago. The rhythms made my head nod, the squelching, staticky synth riffs and forceful zaps held my attention, and the droning hums that provided a foundation were sustaining rather than soporific. Perhaps, then, this DVD's audio content will sell some CDs. Its visual content, though, feels almost like an afterthought - ignorable, at any rate.
Posted by Phil Freeman at 7:51 AM