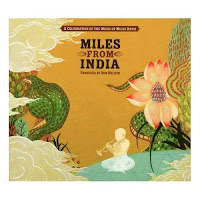 With the recent passing of Teo Macero and Joel Dorn before him, the pool of producers willing and able to push jazz musicians - and listeners - beyond the familiar and into realms of genuine sonic adventure shrunk substantially. Perhaps the last three standing are Hal Willner, Bill Laswell, and Bob Belden.

Belden, who's been exposing the working methods of Macero and Miles in his position as curator of the electric-era Davis boxes, takes the opposite tack here. He gathers alumni of various Miles bands and combines their reworkings of tunes from "So What" to "Spanish Key" with contributions from Indian classical musicians and vocalists. The results are surprising, in both good and bad ways.

Opening a two-CD set with a 19-minute version of "Spanish Key" is a clear signal that a journey of some depth is commencing. Wallace Roney's trumpet is, from the start, competing for space with Indian instruments, synthetic and live percussion, electric guitar, and Indian vocals that fall somewhere between qawwali and scat. It's a dense, ever-shifting sonic landscape, more akin to what Miles was doing in 1972-73 than in 1969, when "Spanish Key" was recorded. But Belden is also clearly aware of drum 'n' bass and laptop music, and he mixes it all accordingly. It's a good start.

Unfortunately, the next track, "All Blues," with sitar playing the melody, sounds like something you'd hear on a third-tier Putumayo compilation. And those are sort of the poles between which all the music here shuttles. Some of it is brilliant, electronic-meets-global sonic stew, and some of it is weak pastiche. But wildman guitarist Pete Cosey and thunderous bassist Michael Henderson are all over it, scorching the earth like it's 1975 again. So you could get it for them alone and be very, very happy.
Posted by Phil Freeman at 11:05 AM