STICKIN' TO THE OLDIES

[From the Cleveland Free Times.] 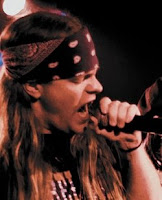 After 15 years, Guns N' Roses' Chinese Democracy has finally arrived. We couldn't think of anyone better to discuss it with than Chad Atkins (a.k.a. "Notquiteaxl"), frontman for Appetite for Destruction, the nation's premier Guns tribute band. They're currently on tour with AC/DC tribute act Back in Black; both bands will be at House of Blues this weekend for a blowout show. In a recent phone interview, Atkins spoke about the new G N' R album and why his band sticks to playing the classic stuff.

So have you heard Chinese Democracy? What do you think? Worth the wait?
It's sitting right in front of me. I've got mixed emotions. Generally, I'm happy it's out, and I think it's a pretty good record. There's some songs on there that kinda go over my head right now, but that doesn't mean that I won't eventually like them or appreciate them anyway. But I would say the majority of the songs are good. "Better" is a nice song. "Chinese Democracy," I think anybody that's cared to hear something has heard that by now. There's a couple of piano songs on here that are really good, there's a "November Rain"-esque song, "Street of Dreams," that's pretty cool. I think that you're gonna have some people that are gonna pick it up and go, 'Oh, it's stupid, there's no Slash,' or something like that. But the truth is, it's been a decade and a half since you heard anything these guys did, and it's just one [original] guy now, so it's not gonna sound the same.

Some of these songs have been played live for years and demo versions have leaked, so people have heard a lot of it already.
Oh, yeah. "Street of Dreams" used to be called "The Blues," and it was gonna be on Use Your Illusion. I mean, it's an old song. Between having fans give me stuff and then finding things on my own, I think I've heard most of the songs already, but it does them justice to listen to a final production. It changes significantly.

But you guys are gonna continue doing the '87-93 version, right? Can you see yourselves adapting some of this material to the live set? Can you foresee a demand for that from your audiences?
Never say never, but I don't expect to do it. Honestly, the amount of people we see out there that really say anything about this album or pay attention - this weekend, last weekend and the weekend before, I've been going out there and trying to push the idea, saying "Hey, it's coming out, make sure to pick it up" and all that stuff, and most of the faces look kinda lost, like, "What are you talking about? Chinese what?" I mean, it's funny, but people don't even know that it's out. 'Cause you've got a handful of people that are there because they're huge Guns N' Roses fans and want to see a tribute band, and then you've got the rest of the crowd that's just like, "Yeah, Guns N' Roses, I like that song 'Sweet Child O' Mine,' let's party." I think that if we played a song like "Chinese Democracy," most of the faces in the crowd would be blank.

Your website says your show even includes stage banter quoted from live albums and bootlegs. So do you end the set by throwing a tantrum and storming off, or jumping into the audience and pummeling some random dude and then bailing?
Well, you know, we've joked about that, and a lot of people have actually said, like, "You oughta do that, set something up and freak people out," but I'm like, "You don't realize how many people don't get things." They'll think it's totally fuckin' real, and think I'm just being an ass. Twenty-four hours later they'll get it, but for the time being it'd be like, "What is he doing?"

Have you ever heard from anybody within the Guns N' Roses organization about what you do?
Well, Dizzy Reed's played with us a few times, and I kinda kept in touch with him a little bit for a little while. But as far as Axl himself, no. I met Slash years ago, before we were doing this. He's an awesome guy, completely not a rock star at all, we just sat there and talked. But there's been things said. I know a lot of them know about it.
Posted by Phil Freeman at 8:20 AM