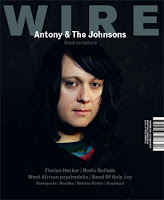 DAVID THOMAS & TWO PALE BOYS
A Map Only Tells Me What I Already Know: Live In Europe 2001
Hearpen
David Thomas's onstage persona is an unsettling mix of shaman, performance artist and working class crank. His lyrics revolve around images of closed factories, lights in the distance and long midnight drives through what's frequently described as 'flyover country' - not so much 'the old, weird America' as 'the slowly dying America.' These live recordings are not songs as much as onstage improvisations around the aforementioned themes (also explored on the Pale Boys' studio album Surf's Up! and its predecessor, 1999's Mirror Man). There are two versions each of "Night Driving" from Surf's Up! and "Lost Nation Road" from Mirror Man, as well as run-throughs - the former relatively straightforward, the latter apocalyptic - of the Pere Ubu tracks "Non-Alignment Pact" and "Thirty Seconds Over Tokyo," but everything else is improvised and all the more compelling for it. Instrumentalists Keith Moliné and Andy Diagram, on guitar and trumpet respectively with a host of effects, create the illusion of a much larger group; over their swirls of sound, Thomas mutters and howls about bridges, drunk driving and shooting out one's television set. The lyrics are elliptical but, taken together, embody a worldview that's part Springsteen, part Bukowski, while remaining piercingly aware of the performative aspect at all times. "That's not much of a song," he croons at the end of "River," and the drunk driving talk on "Lost Nation Road" inspires a great bit of stage banter, as a deadpan Thomas informs the audience that the Dutch government requires him to state that his exhortations - "Let's get drunk and drive real fast" - are merely metaphorical and not behavior to be emulated. The last words heard are "I hope you're satisfied now." Yes. Yes, we are.

TED DANIEL QUINTET
Tapestry
Porter
Trumpeter Ted Daniel is best known for his work alongside David S. Ware in Andrew Cyrille's 1970s group Maono, and a brief partnership with Sonny Sharrock that began with the guitarist's appearance on the sole album by Daniel's group Brute Force, and continued on Sharrock's Black Woman. Tapestry, recorded in 1974 at Ornette Coleman's Artists House and produced by Noah Howard, features Daniel's brother and Brute Force bandmate Richard on organ, Khan Jamal on vibes and Jerome Cooper on drums. It's pretty much an archetypal early '70s loft session, three tracks in 35 minutes with a new, 15-minute bonus cut opening this CD. On that track, "Asagefo," Daniel's trumpet lines ripple the air as Jamal's vibes, Richard Daniel's organ and Cooper's percussion create a churning storm of sound. But the title track is spacious and billowing, swinging occasionally but also storming softly like a cross between In A Silent Way and Joe McPhee's CjR albums, until Cooper takes over the second half with a five-minute drum solo that builds from gentle to crushing. "Sweet Dreams (For Your Eyes)" and "Mozambique" amplify the album's mix of fusion and freedom.
Posted by Phil Freeman at 12:33 PM