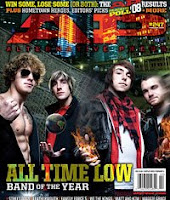 DIR EN GREY
Uroboros
The End
The uroboros is a mythical snake eating its own tail, hardly an appropriate symbol for Dir En Grey's latest album, which finds the band progressing further down the deep, dark tunnel that is their aesthetic instead of simply rehashing their past musical accomplishments. Overconfident in some ways (the album passes the one-hour mark with ease), the band do make a few concessions to a growing U.S. fanbase on Uroboros, singing in English on "Glass Skin" and "Dozing Green." It'd be hard to tell, of course, without reading the lyric booklet - vocalist Kyo's accent and expressionist delivery translate all languages into Kyo-ese. Good thing the postpunk-meets-hardcore guitars, thunderous drums, and depressive, hallucinatory ballads work on universal levels. If you've ever worn black or cried tears of rage (never mind both at the same time), Uroboros could score your year.

TOO PURE TO DIE
Confess
Trustkill
Too Pure To Die vocalist Paul Zurlo sounds like he'd punch us in the side of the neck really hard if we ever met, especially if we tried to explain in person just how boring and rote this album is. Honestly, who needs the stress? Okay, maybe that's overstating the case a little; TPTD may be happiest barking out Hatebreed-esque moshpit anthems (Jamey Jasta and Zeuss co-produced Confess), but they throw some very gentle sonic curveballs the listener's way, including dribbles of synth and Mudvayne-ish choruses. Still, their preferred mode of expression is the breakdown, and there's only so much of that even the most testosterone-poisoned knuckle-dragger needs before he furros his prognathous brow and mumbles, "Didn't you just play this song?" But he'd almost certainly return to punching at the floor with his bros moments later.
Posted by Phil Freeman at 12:25 PM