BACK IN [THE] BLACK

Do exclusive deals with big chain stores help? Only if the band puts in the effort. Just ask AC/DC. 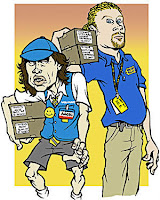 Black Ice, the first AC/DC studio album in eight years, is one of rock's biggest success stories of 2008. Selling nearly 800,000 copies in its first week and staying in the Billboard Top Ten since, it hasn't just revived the band's career — it's been one of the most successful examples of an emerging business model: the store exclusive. Black Ice is only for sale at Wal-Mart stores in the United States, following in the footsteps of similar deals by the Eagles and Journey.

The Australian band's deal is more elaborate than those earlier arrangements, though, and it's somewhat more controversial. When the Eagles released Long Road Out of Eden in 2007, the band had already re-established itself as a touring act following the Hell Freezes Over road trip and live album. It was catering to moms and dads who remembered the band's '70s hits (and were probably listening to mainstream country, itself heavily influenced by the Eagles' sound). Journey was selling new vocalist Arnel Pineda with Revelation, a two-CD/one-DVD set featuring live footage, rerecorded classics and eleven new songs, all for only $11.88. In each case, the Wal-Mart deal seemed like a logical move — the customer base was aging and unhip, so an appeal based on convenience and price was the way to go.

But was AC/DC in that camp? If we're being honest, yeah. The hard-rock gods' last mega-success was 1980's Back in Black, an album that continues to sell and keeps the band a classic-rock radio staple. But AC/DC is not a trendsetting, pathbreaking outfit. It keeps its fans happy by not changing the formula, by sticking to big riffs and shout-along choruses. A new AC/DC album hasn't been an event in twenty years. So what were they gonna do? Chase blog hype? Suck up to Pitchfork? Of course not. The only strategy that made sense was to go after suburban moms and dads — folks who still rocked out, albeit in the car while driving the kids to school, and who wouldn't be heading to a record store anytime soon but might well spot a sign in a Wal-Mart and say, "Hey, new AC/DC album! Cool!" and throw one in the cart.

For the band, it was all about loyalty. As vocalist Brian Johnson told Metal Edge magazine, "Wal-Mart [has] always carried our full catalog on their shelves, whereas other stores have just got the biggie-selling ones." He also cited the chain's ability to keep prices low, saying, "That's it, that's the bottom line. It's five dollars cheaper."

Wal-Mart, for its part, went all-out in promoting the disc, and the band as a brand. According to independent music marketing executive Bob Chiappardi, who was involved in the strategy, "it was an encompassing thing...they put a pop-up store in the men's department in all the Wal-Marts, at the entrance they had posters [and] postering throughout the store, they had stand-up racks in the aisles approaching the men's department, and then they had displays in the CD department, a whole top row on the VH1 rack. Not only back catalog, but video games, the AC/DC version of Rock Band and T-shirts."

The band, in turn, employed all the standard promotional strategies for a new album — it made a video for the first single, "Rock N' Roll Train," submitted to interviews and embarked on a massive world tour. Result? Black Ice (which is fantastic, by the way) topped the charts, the concerts sold out — and the band was back, any lingering image controversy surrounding its collaboration with Wal-Mart washed away on a flood tide of cash.

But what about the year's other big exclusive deal — Guns N' Roses' release of Chinese Democracy through Best Buy? In many ways, it was something of an apples-and-oranges comparison. Wal-Mart is a much larger chain than Best Buy, and it threw itself behind its chosen album much more vigorously. BB, which significantly reduced the amount of floor space devoted to music in 2008, offered no store-within-a-store. It merely set the album on cardboard towers on the sales floor, which were dwarfed in many outlets by similar displays advertising the complete Sopranos on DVD.

But according to a marketing executive familiar with the deal, this minimalist-seeming strategy was all that was arranged up-front: "They're kinda just doing what they can do with what they've got. The only thing [Guns N' Roses] had to deliver was a video and the record." (The video will be for the second single, "Better," and should be out sometime soon.)

According to industry scuttlebutt, the negotiations for the Best Buy deal were frantic and down to the wire. "These guys didn't have finished music until a month before," says one source. "It was insane. In all honesty, Axl was working on everything — the art, everything — right to the end." Indeed, in a recent web chat on a Guns N' Roses fan site, Rose (manager Andy Gould later confirmed that it was really him) stated that there were plans for multiple covers that may emerge in the future, that he has a favorite, and it's not the one currently in stores.

There are rumors of a 2009 Guns N' Roses tour. And, hell, Axl might even deign to submit to an interview or two in the new year. But thus far, Chinese Democracy sales have been disappointing: Less than 500,000 of the 1.3 million copies Best Buy took on have departed the warehouses.

Still, one executive involved with the album's marketing insists there's no reason to panic just yet. "You've gotta expect that there's gonna be a tremendous amount of backlash because of how long the record took. There's no way to live up to that expectation. So let all that stuff pass, and then get down to really promoting once everyone has absorbed it and listened to it more than once."

This slow-and-steady approach has antecedents; it's worked twice for Kid Rock. Devil Without a Cause, his breakthrough album, took nearly a year to hit, and Rock N Roll Jesus was gathering dust on shelves until its third single, "All Summer Long," took off.

Another industry source could see the same thing happening with Guns N' Roses. "I don't see why this record — especially when they start going to the ballads and stuff like that — I don't see why this record can't be like a Kid Rock record, and be something that is worked and songs come off and keeps on trudging along until somebody picks their head up and goes, 'Hey, Guns N' Roses is up to 1.3 million,'" the source says. "Then all of a sudden people start paying attention. Until 'All Summmer Long' came out, people had forgotten about that record."

The only question is, can a struggling music industry wait that long for a payoff on an album the band waited fifteen years to release at all?
Posted by Phil Freeman at 11:36 AM

nice article. i didn't notice tgat you had written it when i read it in the print edition the other day.