ONE MORE BEFORE WE MOVE ON 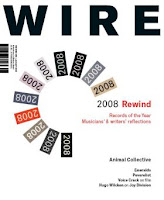 Final thoughts on 2008, from the annual Rewind issue of The Wire:

This was a tremendous year for metal and not such a great one for jazz, but I did get to interview Bill Dixon for The Wire, and piss off a bunch of his acolytes in the process. Always happy to be the caveman at the cocktail party. Longtime heroes I got to interview for the first time in 2008: Rob Halford of Judas Priest, Barney Greenway of Napalm Death (who revealed an unfulfilled desire to have Mark E Smith guest on their 2006 album Smear Campaign), Alice Cooper. As print journalism and the music industry race each other around the plughole of history, each year seems a little bleaker than the one before - until you start digging into the astonishing variety of art and culture that still manages to will itself into existence, market economics be damned.
Posted by Phil Freeman at 12:01 PM