THEIR BEST ALBUM YET 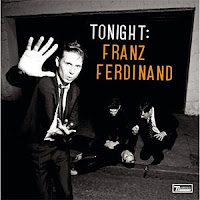 Franz Ferdinand's self-titled debut was a ball of witty postpunk energy and dancefloor savvy. Its follow-up, You Could Have It So Much Better, tried to keep the hot streak going with the stomping glam-rock single "Do You Want To," but was derailed by side trips into balladry. Four years later, the band is a little weirder and more stylistically omnivorous on Tonight, but it's also more fun than ever before.

The members borrow keyboards and a creepy, lurching rhythm from Iggy Pop's The Idiot on "Twilight Omens" and a manic noise-guitar outro that's pure Ron Asheton (R.I.P.) on "What She Came For." Whiteboy-funk jewel "No You Girls" stomps all over Blur's "Girls and Boys" with throbbing bass, guitar lines straight from Talking Heads' Remain In Light, and handclaps (handclaps!). Most bands would kill a close relative to write a hook half as irresistible as "No You Girls," and Franz does it with a grin and a shrug. "Send Him Away" could be a Grace Jones cover, while "Live Alone" is straight-up disco-rock with throbbing sequencers and another spine-readjusting bassline. Tonight peters out somewhat after the eight-minute "Lucid Dreams," the latter half of which is spent in an electronic fugue state. "Dream Again" is an ill-advised dubby experiment, followed by acoustic album closer "Katherine Kiss Me," a juxtaposition that defies all logic. Still, nine smart, upbeat tracks out of twelve make this a welcome return indeed. [From the SF Weekly.]
Posted by Phil Freeman at 9:21 AM