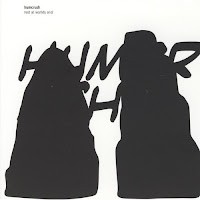 This Norwegian keyboards/electronics/drums duo's 2004 debut, called Humcrush and credited to keyboardist Ståle Storløkken and drummer Thomas Strønen, was a surprisingly supple exercise in groove, with oozing and humming electronics pelted by intricate rhythmic outbursts. A few tracks, like "Marked East" and album closer "Japan," almost sounded like Confield-era Autechre. The follow-up, 2006's Hornswoggle, on which they adopted the first album's title as a group name, was more digital and clicky, but demonstrated a considered evolution. The pair continued to rock the funky beats, while heading into near-Ambient territory on cuts like "Anamorphic Images" and "Roo."

Rest at Worlds End (which has 11 tracks on CD and 18 on vinyl - for which those of us without turntables say "gee, thanks, guys") is a live album, though it's not exactly dominated by the roar of wild, cheering throngs. Instead, it's largely a quiet effort. The few bursts of noise, like "Creak" and album opener "Stream," are aggressive (Strønen, who's all over the kit, in particular) without being assaultive; Humcrush's brand of crunch is warm and human. The quietest moments of all, like the title track and "Audio Hydraulic," spread that warmth in a manner reminiscent of early '70s Tangerine Dream, before they got sequencer-happy and back when they were still drifting, in Lester Bangs' words, "like silt seeping on the ocean floor." When the pair kick into gear, their funk is ascetic and cybernetic, emulating the crisp Swiss perfection of Nik Bärtsch's Ronin. Ultimately, Humcrush make unique and uncannily compelling music.

[I also have a really excellent Invisible Jukebox interview with James Plotkin in this issue. Check it out.]
Posted by Phil Freeman at 7:32 AM