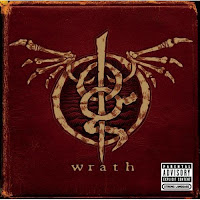 LAMB OF GOD
Wrath
Epic
Lamb of God's third album, 2003's As the Palaces Burn*, was both a powerful antiwar statement and one of the 21st century's most crushing metal releases. The follow-up, 2004's Ashes of the Wake, was kind of a holding action, offering more of the same lyrical themes, crushing riffs and intricate rhythms. It wasn't bad, but it was a sequel. On 2006's Sacrament, they got all introspective 'n' shit, and the music suffered further. Even the first single, "Redneck," didn't have the power of earlier songs like "Ruin" and "Laid to Rest." Wrath, though, is a ferocious return to form. Songs like "Contractor" and "Fake Messiah" offer some of the band's fastest riffs, most punishing drumming and angriest lyrics (and vocal delivery) since Ashes of the Wake. American metal is on a hot streak, and Lamb of God is poised to be the new Pantera.

[*counting their self-titled release as Burn the Priest]
Posted by Phil Freeman at 5:43 AM