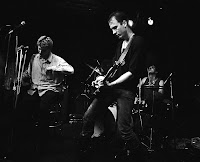 I got copies of the two new Flipper albums, Love (studio) and Fight (live), in this morning's mail. They're on MVD Audio, a low-profile label that puts out decent releases by bands the marketplace doesn't care much about anymore - in the same package, I got a new CD by the Australian boogie-rock band that's not AC/DC, Rhino Bucket. It's called The Hardest Town, it features two original members plus ex-AC/DC drummer Simon Wright and guitarist Brian Forsythe (formerly of Kix), and I bet it sounds exactly like a late '80s AC/DC album. This is a record guaranteed to make absolutely no commercial impact. But back to Flipper.

I've been a fan for 25 years or so; I first heard them when a friend played Album: Generic Flipper for me in junior high school. When their long out of print second studio disc, Gone Fishin', the equally rare double live disc Public Flipper Limited: Live 1980-1985 and the intermittently available compilation Sex Bomb Baby! were reissued last year, I bought them all from the Amazon MP3 store, and they were every bit as awesome as I'd remembered them being, Gone Fishin' in particular. I'm not anticipating anything as ambitious as the horns and funk of that album on the new studio record, as both discs were recorded with a stripped-down quartet featuring three original members (vocalist Bruce Loose, guitarist Ted Falconi, and drummer Steve DePace) along with bassist Krist Novoselic - you know, the Washington State political activist who used to play in that mopey-ass trio that ruined '90s rock. And I'm not expecting the hostile audience-baiting of their semi-legendary '80s shows (I remember hearing a live tape that featured Loose telling the crowd, "The more you heckle us, the longer this song gets") from Fight, given the inner tray photo of a wildly grinning audience. Still, I'm glad to see Flipper fully reactivated; these discs won't get the hype Black Ice or Chinese Democracy got, but they're equally welcome comebacks as far as I'm concerned.

UPDATE: Okay, I've listened to Love, and it's good. Novoselic is the bassist, no more, no less; he's prominent in the mix, but the songwriting is clearly in the old-school Flipper style. The actual recording (by Jack Endino) is clean and doesn't include the ostentatious false starts and fuck-ups that were present on Generic and Gone Fishin', but it's hardly a pop record. Ted Falconi's guitar is still more about waves of noise than traditional rock riffing, and Bruce Loose hasn't become any better a singer since Flipper was last in the studio 17 years ago or whenever it was that American Grayfishy was recorded. The band hasn't gone soft; the new stuff isn't a letdown. Good for them.
Posted by Phil Freeman at 8:26 AM