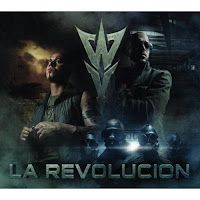 As reggaeton steadily expands its sonic parameters (Calle 13 are full-on crazy at this point, Tego Calderón is a massively underrated weirdo his ownself, and Don Omar has disappeared down some kind of sci-fi techno wormhole on his new album), Daddy Yankee and especially Wisin y Yandel continue to produce club bangers for whatever you call the Latin equivalent of guidos. I like their voices, though, particularly Wisin's hyper-aggressive, almost enraged rapping; even as Yandel is crooning to bring the ladies in, Wisin is shouting at everyone in range like a younger, slightly more fey DMX. He was hilarious on their collaboration with Enrique Iglesias; poor Enrique's doing his usual whispery thing, trying to be all sensitive and whatnot, and then Wisin comes in with his scenery-chewing, berserker style like he didn't even listen to the song he was rapping on.

The new album, La Revolución, came out yesterday, and it's pretty swell. It's thoroughly of-the-moment as far as production is concerned - Yandel's voice is slathered in vocoder and Autotune, though I give them credit for setting it to "Daft Punk" more than "T-Pain," and there's not a single non-software-based musical sound on the whole damn record as far as I can tell. The guest appearances are in some cases welcome (Ivy Queen) and in other cases very much not (50 Cent on the new single, "Mujeres in the Club"). I fully expect to hear tracks from this album booming out of tricked-out Japanese cars all over Mytown all goddamn summer.

Embedding has been disabled on a lot of their YouTube videos, but here are links to a few of my favorites: