[I wrote this story for Global Rhythm back in 2008, and rediscovered it in a fit of self-Googling; I wound up not loving Sino, their most recent album, but interviewing these guys was a genuine thrill and pleasure, and they're still one of the best live acts around, from any country.] 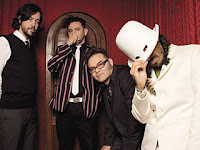 Rubén Albarrán, Café Tacvba’s diminutive vocalist, is seated in the lobby of New York’s Roosevelt Hotel in white jeans and a white T-shirt, his hair pulled into braids on either side of his head. Resting in his lap is a custom-made white hat—like a bowler, but deep enough that when he pulls it on, it slides just over his eyes so he can peer through two holes cut out of the band. Like all the Tacubos, he’s 40 or maybe a few years past that (biographical information on the band is sketchy, and they like it that way). He’s got a son and a daughter, and he’s talking about the impact of fatherhood on his art.

“I think that I have a better connection with my feelings and with my heart,” he says, his speaking voice softer than his raucous onstage bark. “I don’t know if it’s done already, I don’t know if this connection is going to last forever, but it’s a very beautiful thing for me. It’s like you have a vision of the future and the past at the same time. There’s a lot of forgiveness to your parents. I feel very happy to be a father.”

Albarrán is known to Tacvba fans for changing his name every time the band releases an album: Pinche Juan, Cosme, Anónimo, Ñru, Gallo Gasss, Élfego Buendía, and on and on. On his debut solo album, 2006’s largely electronic Bienvenido Al Sueño (Welcome To The Dream), he was Sizu Yantra. “In my case, the solo project comes with a family,” he says, when asked how he divided songs between Tacvba’s albums and his solo work. “It was because of the family, because of becoming parents and needing to express this experience, so it was very easy. But I think if I had another solo project, it would be difficult to decide which songs go for Tacvba and which go for that. For me, there’s no separation. It’s just the things I’m feeling, and who I’m going to share this creation with. It’s what I’m doing in that moment, and the accent is on the reation.”

Albarrán is joined on the Roosevelt’s plush sofa by Enrique “Quique” Rangel, Tacvba’s bassist (and brother to guitarist Joselo Rangel), who looks a little bit like Pere Ubu vocalist David Thomas, albeit slimmer and less cranky. The discussion turns to the band’s sixth album, Sino—their first in four years. “The title means ‘destiny,’” Rangel explains. “It’s a word that is not used in Spanish often to define destiny. And [with] the spelling, you can say yes and no at the same time. It talks about destiny not as something that is sent by the gods, not as fate, but as something you can decide by taking or not taking decisions.”

Tacvba albums frequently seem like a response to the one before. Their breakthrough disc, 1994’s Re, featured 20 short, genre-hopping tracks. They followed it with 1996’s Avalancha De Éxitos—a covers album that spanned an equally broad sonic range, from jittery acoustic punk to hip-hop to Mexican folk to romantic balladry. Their 1999 double CD Revés/Yosoy was spread over one disc of instrumentals—nearly all of them numbered rather than titled—and a second disc of songs simply named for people, places, objects and events (“El Padre,” “El Río,” “El Espacio” and “Guerra,” among others). The band played with language in the disc’s title “revés” means “backwards” in Spanish, and “yo soy,” which means “I am,” is a palindrome.

The follow-up, 2003’s Cuatro Caminos (Four Roads), was a major shift from the arty, moody experimentalism of that Latin Grammy-winning opus. The band had originally planned to work with four different producers, but wound up using only three: longtime creative partner Gustavo Santaolalla, Ween collaborator Andrew Weiss and former Mercury Rev bassist Dave Fridmann, best known for his work with the Flaming Lips.

“I enjoyed the way [Fridmann] worked a lot,” Rangel recalls. “We stayed with him for 12 days in his studio, which is an hour outside Buffalo. There’s a cabin where you stay, you see Japanese movies that the Flaming Lips have left from their tour, and work eight to 14 hours a day depending on the schedule or not-schedule, which is very free. I remember those days in a dreamy way. Sunset was at four or five P.M.—that was the first time we all saw snow falling. [Fridmann] has all these instruments, so he’ll say ‘I need something in this section.’ What do you need? ‘A texture, like darkness.’ So you have to decide what darkness means to you, whether it’s a double bass or this old synthesizer. They’re very subtle instructions, and you record something that could be used or not in the final track. I think it made our songs more of a soundscape.”

Not everyone welcomed the change. Some reviewers thought Cuatro Caminos just sounded like a Flaming Lips album in Spanish, especially given the addition of live drums—a first for Tacvba, produced in typically booming Fridmann style. But Cuatro Caminos won the group a Grammy for Best Latin Rock/Alternative Album, and two Latin Grammys, including one for Best Rock Song honoring the love ballad “Eres” (“You Are”).

Sino is a step forward from Cuatro Caminos in that it sounds like the group is reasserting their collective identity, particularly on the eight-minute epic first single “Volver A Comenzar” ("Returning To Begin"), which features a pulsing, disco-like bassline with swoopy synths that combine to create an impression not unlike early ’80s New Order, but with a much more passionate lead vocalist in Albarrán. One of the weirdest elements is the presence of prominent, almost prog-rocky synthesizers, especially on “53100,” which also features a lead vocal from guitarist Joselo Rangel. “El Outsider” combines live drumming with electronic percussion, as well as a frenetic Albarrán vocal—one of the few new tracks that sounds like the old, spazzy, fun-loving Tacvba of “No Controles” and “La Ingrata.”

But at least all the changes are the band’s own. “On this record we’re producing ourselves,” says Quique Rangel. “We have Gustavo, but also we have Tony Peluso, who is the sound engineer who worked on our first records and on Cuatro Caminos. Some of the songs were recorded by him, but we wanted to take the producer’s credit. We started working on these songs and rehearsing and making arrangements last year, so our ideal was to press ‘record’ and record everything that should be there. It couldn’t be done, of course, but it’s the closest we have come to a live-in-studio album.”

“We started playing like ‘1-2-3-4’” Albarrán adds. “I sang and played the guitar, and most of those vocals were printed.”

“We worked again with two drummers,” Quique continues. “Luis Ledezma works with us live, and Victor Indricio was on the last record. We did 20 songs, arranged them, and with Gustavo we decided which ones we were working on. In the process of recording, in the studio, Tony was involved with this. I think it’s a very rounded record. We are very happy with what happened in the studio with the songs.”

A big part what initially captivated critics, in Latin America and across the globe, was the explicit Mexican-ism of Café Tacvba’s music. They became a vanguard act in the 1990s’ “rock en español” movement by embracing the sounds and iconography of their homeland, while also displaying hipsters’ tastes in rock, funk, ska and hip-hop. “Joselo and…I don’t know his name,” says Quique, gesturing to Albarrán and laughing, “they met in college, studying industrial design and graphic design…I think we tried to make a rock band, but discovered that there were some elements in our Mexican contemporary culture that weren’t included in the music that people were doing, so we appropriated them and they easily and naturally became part of our sound. So that’s how we started to make a rock band that sounded different than what was happening.”

Ironically, the generation of bands that’s sprung up in Tacvba’s wake isn’t nearly as concerned with forging a uniquely Latin identity. They take their ethnicity for granted, and many create music on laptops that sounds like it could be from anywhere at all. But Albarrán’s not worried about the kids. “I think it’s like a cycle,” he says. “At a certain point, the popular culture, what the young people are doing, needs to have this base and have this heritage juice, and then, because these young people do it, the ones that come later, they don’t need to do it. But then again, the youngest will need to do it again.”

Café Tacvba are, at this point, one of the last bands standing from the initial wave of rock en español. Caifanes have become Jaguares, Los Fabulosos Cadillacs have broken up, MalditaVecindad recently reunited for a U.S. tour but have no record deal… “There are other groups that have survived, that still play,” says Quique, “but they have had periods of not working together. Some other bands still play but don’t have the original members. I still don’t feel like we are the oldest band working, but when other people, other bands that started playing two years ago and now they’re on the radio and we share a bill, they say ‘When I was nine years old, I saw you,’ and then I realize yes, we are the oldest band.”

“When that kind of band comes backstage, we see them and they are like our daughters,” laughs Albarrán. “We know [then] that we’re an old band.”

Another thing that separates Tacvba from the pack is their cautious rejection of political grandstanding, a pitfall into which many an otherwise worthwhile act has tumbled. “I think our music has political content,” says Rangel, “but we are not telling people what they should do and sometimes we use a lot of images and metaphors, not to talk about an issue but to talk about our point of view in life. Sometimes the political contents of a lyric could be a pamphlet or propaganda, and I think with our group, the fact of ourselves making the music we do, it’s a political statement.”

Albarrán picks up the thread: “The way, for example, we decided never to do commercials for any brand. We have decided not to sing in English just to reach an audience. So for us, this is like our political position. And I think all the body of our work, it is the political position of the band. We don’t need to have a specific lyric talking about a specific thing. We have never played for a [political] party, because inside the band we have different political positions, and we don’t want to do it. When there is for example a charity concert or something like that, we think it is fine to do it.”

“As long as it doesn’t have any relationship with an agenda or a political movement,” Rangel adds. “We are very careful to decide which organizations we are going to give our work.”

Ultimately, in every sense (political, musical, personal), Café Tacvba is a world unto itself. “You can say the members, the composers of Café Tacvba are people who have had lives,” says Rangel. “We are in our 40s, we have just celebrated 18 years as a group, and I think Café Tacvba is the relationship between these four people who have shared, and we are like an entity. It’s not easy for anybody else to get in there. We have had a relationship, for example, with Gustavo or with our manager, but still, Café Tacvba is this entity. I don’t think there is room.”
Posted by Phil Freeman at 8:12 AM