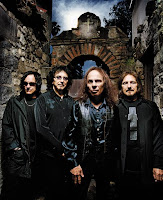 Ronnie James Dio, Tony Iommi, Geezer Butler and Vinny Appice, who collectively recorded Black Sabbath's Mob Rules and Dehumanizer albums (Appice didn't play on Heaven and Hell; he joined for the 1980 tour), didn't reform as Heaven and Hell because they were afraid of pissing off Sharon Osbourne. Iommi owns the Black Sabbath name, after all. Rather, they did it so they could focus on the songs they recorded during the Dio years. You won't be hearing "Paranoid" or "War Pigs" at their concerts.

It's a wise decision. Dio-era Sabbath was a whole different beast from the Ozzy-fronted version. A lot had to do with lyrical perspective; Dio's mythic archetype-mongering was a far cry from the gloomy, occult blues of the early years, when bassist Butler wrote most of the words. Where the hyper-theatrical Dio came off like a wizard on a mountaintop, Butler's lyrics seemed to come from the perspective of a terrified peasant below.

"When we did 'Children of the Sea,' I think that was the first one we wrote together, and that showed that I was more than capable of doing it," recalls Dio. "And Geezer really didn't want to write. When I came in, he said, 'You're gonna write the lyrics, aren't you?' and I said, 'Well, I certainly hope so,' and he said, 'Oh, thank God, that's one job I never wanted.'"

In a relatively short time, Dio made Sabbath his own, ultimately mixing the heroic posturing with a dark and twisted worldview that persists to this day and has been hugely influential on generations of metal musicians and fans.

"I think lyrically I started to make the band a lot more cynical than it was before," he says. "And I kept the fantasy writing and the kind of mythic attitude for the Dio band. I let that be a separate compartment. And if you listen to the new album, there are a lot of cynical things in it, like the song 'Eating the Cannibals.' So at this point I'm staying quite away from the mythical end of it, with the exception of 'Bible Black.'"

The band was a lot faster and more aggressive with Dio up front and Brooklyn-born Appice in back. Tony Iommi displayed an unexpected melodic flair and fleet dexterity on the fretboard, tearing through songs like "Neon Knights" and "The Mob Rules" with an almost punk-rock intensity. Behind his bandmates, Appice pounded the drums like a caveman, abandoning the almost jazzy grooves original drummer Bill Ward had constructed in favor of a thundering assault. This was welcomed by the group's remaining English members. "They never said 'Oh, don't play that' or 'Can you make it more like this?' They never said anything," says Appice.

After only a few years, of course, Sabbath V2 split, with Dio and Appice going on to form Dio the band. In 1992, they rejoined Iommi and Butler for Sabbath's underrated Dehumanizer and its attendant tour, then departed again as quickly as they'd arrived. Fifteen years after that, all four men came together once more, recording three new songs for the Black Sabbath compilation The Dio Years.

"I hadn't seen everybody in six, seven years, Ronnie in four or five years, and within five minutes after I walked in, it was like nothing had happened," says Appice. "We were still hanging out."

The group embarked on a short tour of Canada under the Heaven and Hell banner, then played (and recorded) a blistering gig at New York's Radio City Music Hall. It was only after all this that the decision was made to record a new studio album, The Devil You Know.

It's a crushingly heavy album, closer in spirit to early Black Sabbath than the previous Dio-era records. The lyrics are almost Old Testament sermons on sin and punishment, something Dio attributes to the influence of the outside world.

"It's not just the recession, but threat of nuclear war, the Middle East, the economy, what's going on in Africa — all those things you can't help but be part of and influence you somehow," he says.

Still, it's not totally despairing.

"None of the songs end with 'OK, and now we're going to die,'" says Dio. "My manner is always to let people know that someone out there feels the same, and luckily I've got a stage to speak for them."

And musically, it's brilliant. Songs like "Rock & Roll Angel" and "Bible Black" allow Tony Iommi in particular to stretch out, playing delicate acoustic verses and soloing in a subtly psychedelic manner reminiscent of Pink Floyd's David Gilmour. "We could certainly do another album, without a doubt," says a justifiably confident Dio. "When and if that will be is something else."
Posted by Phil Freeman at 10:17 AM